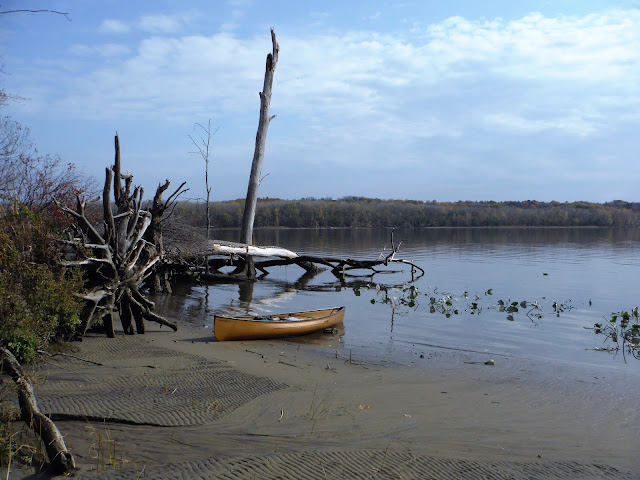 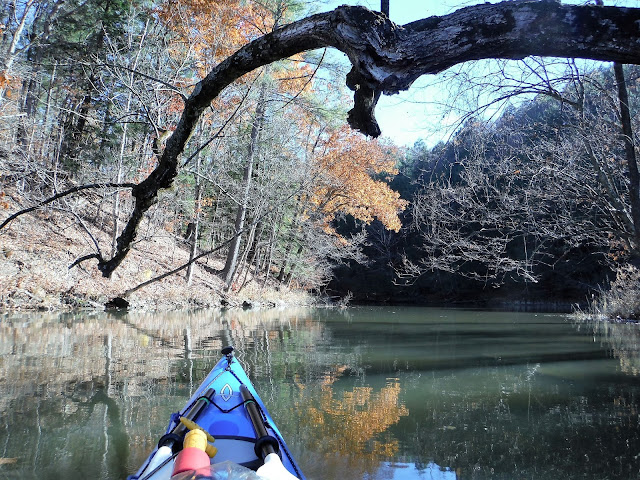 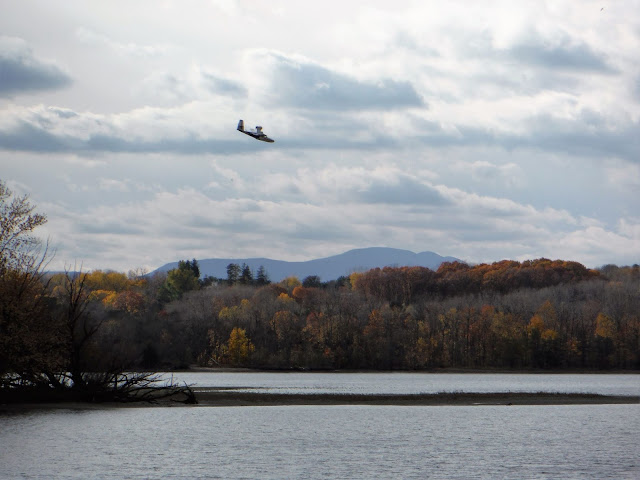 Nov 5, 2016 - HUDSON RIVER from Stockport Landing, started ~2 hours before low tide. Partly sunny, temp rising thru the 50s, little wind. On a mission. Short paddle on Stockport Creek then S on the HR. Soon into East Flats, the bay was already fairly shallow, it's deeper along the N shore. N into a creek (L of a duck blind) to where my GPS had gone overboard 3 days ago. After a couple of sweeps I spotted it in ~15" of water & retrieved it. Back to the HR & stopped at a sandy beach for lunch at low tide. Examined the GPS, put it back together & it worked! after being submerged for 3 days! Wind picked up from the NW so headed out. Mission accomplished. Bald eagles, mergansers, gulls. 3.2 hours.

Nov 2, 2016 - HUDSON RIVER downstream from Coxsackie. Started ~1.5 hours before low tide. Down W shore (light development) past 4 Mile Point to West Flats. Was able to find one deep channel into the marsh at low tide. Crossed over to Priming Hook & back on E shore (mostly undeveloped). Lost my GPS in a creek in East Flats. Went around E side of Stockport Middle Ground, an island then past the primitive campsites of Gay's Point. Forecast was for "mostly cloudy" in the pm but got "mostly sunny"; wind dropping from 5mph to 1mph; temp rising into the 60s - nice! Very few other vessels. Red-tailed hawk, bittern, domestic geese, buffleheads, mallards, wood ducks, kingfishers, robins. 6 hours

Oct 19, 2016 - HUDSON RIVER from state boat launch in Athens. NW wind so chose a SW direction on the river; started 1.5 hours before low tide. Launched into the Murderers Creek (aka Murderer's Kill) & a few strokes & one is out on the HR. Downstream past Athens staying close to W shore. View of the Catskills. Shallow area for a while with eelgrass. Turned around before the Rip Van Winkle Bridge & stopped on gravel beach at S end of Cohotate Preserve for lunch. Swung close to Hudson Athens Lighthouse on way back - 10mph wind opposing flood current produced 1' waves. Up the Murderers past the boat launch a half mile to dam that creates Sleepy Hollow Lake. 10.2 miles, 3.8 hours. Southeastern zone duck hunting season resumes Nov 12.

Nov 6, 2015 - HUDSON RIVER from Athens state boat launch. Record high temp in the 70s, very windy tho. Started over an hour before high tide so that we would have maximum water in the marshes. Upstream with tailwind to West Flats, a large marshy area with many channels to explore & get lost in. Wind knocked much cattail "fur" into the air, looked like snow & got into my eyes. Followed a stream toward Vosburgh Swamp, downed trees blocked the way eventually. Back to launch with 2' waves (wind opposing the current creates bigger waves), SSW wind gusting to 30mph - a blast in the Alchemy kayak. Paddled up Murderers Creek for 0.6 miles to the large dam that creates Sleepy Hollow Lake. 7.9 miles, 3.5 hours. Stopped at nearby Four-Mile Point Preserve to hang out & watch some big boats pass by; much eastern red cedar here.

Nov 4, 2015 - HUDSON RIVER from Stockport Station at the end of Station Rd in Columbiaville. A gravel/mud launch into the mouth of Stockport Creek next to rr tracks. Started at high tide. 1st explored the creek to the SE which goes under the rr bridge then up a spur to the R - wood ducks. S on the HR & into East Flats. Silo & picnic pavilion of Harrier Hill Park can be seen on the hill to the E. Up a winding creek in a generally NW direction slowly narrowing to boat width, shores of wild rice & cattails. Lunch on sandy beach near Priming Hook with view of the Catskills. N past Stockport Middle Ground, an island, stopped to check out a campsite. Past to the E of Gays Point & into Empire Brickyard Bay - shallow mud flats, find deeper water on E side. Back to launch avoiding shallow water to the E. 11.3 miles, 5.6 hours. Another warm sunny Indian Summer day. Saw 2 people in kayaks without PFDs on - NYS requires that PFDs be worn (not just made accessible) from Nov 1 thru May 1. Southeast zone duck hunting season starts again on Sat Nov 7. 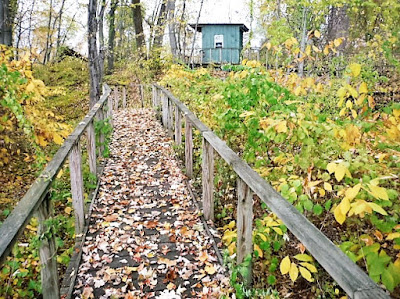 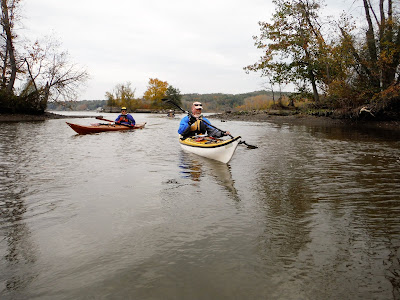 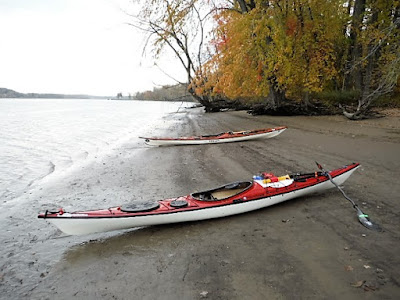 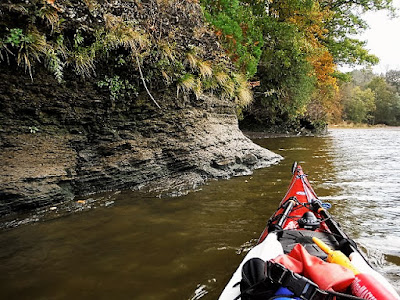 Dec 3, 2012 - HUDSON RIVER kayaking from Coxsackie boat launch. Launched at low tide. Downstream along the W shore past 4 Mile Point (light development). At Hudson Anchorage crossed to E side & headed N (mostly undeveloped). Stopped for a break on beach of Stockport Middle Ground, an island. Continued N past campsites of Gay's Point to chimney stack of historic ice factory then crossed to the put-in. Waves up to 1' with 5-15mph N wind opposing tidal current. Some big boats. 3.4 hours. 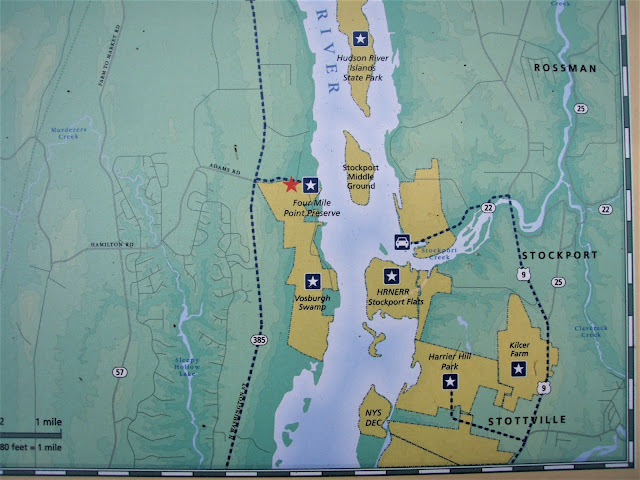 Oct 23, 2011 - HUDSON RIVER from state boat launch on Rt. 385 north of Athens. Morning clouds gave way to afternoon sun, high of 60F, light wind. Launched 3.6 hours before high tide into Murderer's Kill which soon enters the Hudson & Middle Ground Flats, a long island, is seen to the E. Headed upstream along the W shore then into West Flats marsh, where there are many channels to explore (easier close to high tide), Vosburgh Swamp is a continuation of the marsh to the N. Back out to the river at Hudson Anchorage & Harrier Hill can be seen to the E with its silo & pavillion. Continued N & around cliffy Fourmile Point & then Four Mile Point Preserve where there are picnic tables. Stopped at the Coxsackie boat launch where there are picnic tables & portapotties. Continued W of Coxsackie & Rattlesnake Islands - a brant flew in low & landed amongst us. High tide. Crossed to E side of the river where you can find some small inlets & bays to explore plus small cliffs & sandy bluffs. Pass the brick chimney of an historic ice house at Nutten Hook. Pass beaches & campsites to Gay's Point part of Hudson Islands SP. Paddled E of Stockport Middle Ground (an island), Stopped at Stockport Station - new picnic tables & gazebo here next to rr tracks. As we paddled S on E shore there were nice views of Catskill mountains. Crossed over (best to minimize time paddling in the shipping channel by shooting across at a right angle to the channel) & came back down the W side of Middle Ground Flats. Stopped to visit the Halfmoon, moored just S of the mouth of the Murderer's. 4 bald eagles (look for nests on islands). Some barges & ships, not much pleasure boat traffic. Some fall color mainly on dry upland (oaks, sumac); most cottonwoods, swamp maples have dropped their leaves. Thing I like about this trip is little development & a lot of state land. 17.7 miles, 6.5 hours. Duck hunting season resumes Nov. 5. 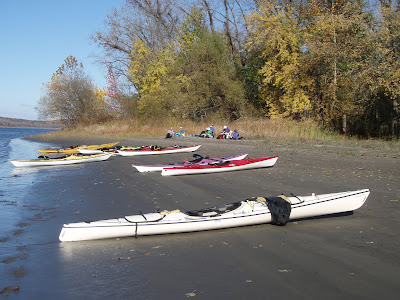 Nov 3, 2010 - HUDSON RIVER from state boat launch N of Athens, where the Murderer's Kill joins the Hudson. Very calm early. Around N end of Middle Ground Flats (a long island) & over to E side of the river. Explored East Flats, a bay with marshy N end - could see the silo & pavillion of Harrier Hill Park up to the E (see Oct 25). Bald eagle perched high on tree. Stopped for lunch at small beach at S end of Stockprt Middle Ground, an island. Circumnavigated the island, spotted a hawk & eagle's nest. High tide. Crossed over to W side of river after a barge/tug went by, wind picking up from the S. With the wind opposing the current we got short period steep waves over 1'. Ducked into the channels amongst the marshes of West Flats/Vosburgh Swamp & avoided the wind for a while - since it was close to high tide we were able to find a route thru. Back on the river for some more wind & waves - the seaworthy Merlin II canoe made for a fun ride. Finished by going upstream a bit on the Murderer's Kill to dam then back to launch. 4.8 hours. Many duck blinds in the marshy areas - duck hunting season resumes Sat Nov 6.

Nov 2, 2008 - HUDSON RIVER kayaking from end of Station Rd in Stockport. Started a little before low tide. Headed S & around Middle Ground Flats, a long island near Hudson. Interesting Hudson-Athens Lighthouse & view of snowy Catskill Mountains. N on W side of river, explored backwater & channels in marshy area. Around Stockport Middle Ground (an island) before going up Stockport Creek. Bald eagles, r-t hawks, swans. A ship & a few motorboats but most of time we had the river to ourselves. Major duck hunting resumes Nov 8. 15 miles, 5.5 hours. 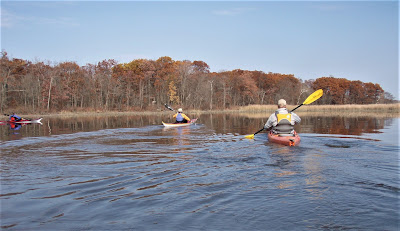 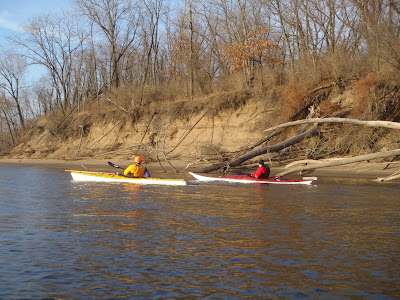 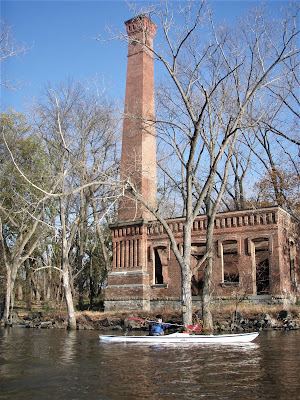 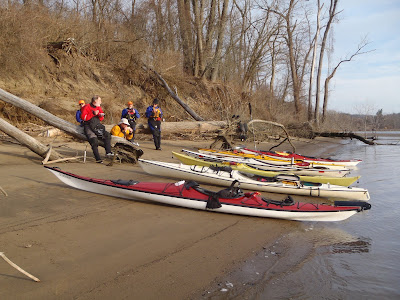