3 SCENIC PADDLES WITH HIKES IN THE ADIRONDACKS

On online forums and social media, one often sees requests for suggested combination paddle and hike trips – the combination allows us to expand our experiences and also gets us to exercise a greater variety of muscle groups in the process.

A great view, in my opinion, should include at least one water body like a pond or lake, and have minimal sights and sounds of civilization. I have quite a number of favorites in this category and I have picked three of them to tell you about here. 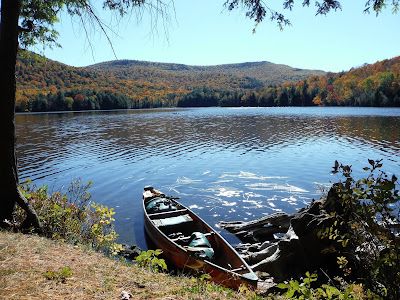 Garnet Lake is a 2-mile-long lake in the southern Adirondacks. Although there is some development at the north end of the lake, the southern half is fairly wild and most of it is state land. The put-in is at a small sandy beach on the east shore, 0.8 miles from the north end of the lake. A low metal barrier has recently been installed here to minimize the use of motorboats – motors are allowed, but you rarely see any – also, personal watercraft are banned on waters in the Town of Johnsburg.

There are several designated campsites spread out around the lake. You will notice that the southern part of the lake is fairly shallow and has many drowned tree stumps, some of which look like modern art sculptures – Canada geese like to nest on them. Look for great blue herons stalking prey in the shallows, snapping turtles too. Loons are commonly seen and heard all over the lake and paddlers who scan the shorelines may notice some mink activity. 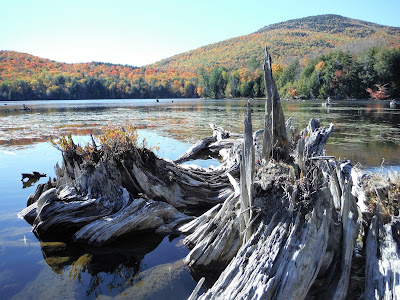 Garnet Lake is surrounded by mountains. Mount Blue rises almost 1,500' above the lake to the west, Ross Mountain rises to the north, and the cliffs of Crane Mountain can be seen to the northeast. 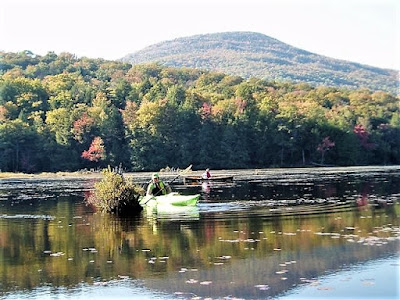 The trail to Lizard (spelled “Lixard” on some maps) Pond begins well down the west shore. The trail gains 300 feet before reaching the scenic pond and lean-to after a walk of 1.2 miles. Mount Blue rises steeply from the north shore and, if you are lucky, you will hear loon calls echoing off its slopes.

The relatively easy bushwhack to open rocks below Mount Blue's treed summit begins 0.7 miles from Garnet Lake. Take a course west of north and climb steeply up a ridge, gaining 900 feet in 0.8 miles Some of the route is across open rock slabs. The best views are well below the summit – Garnet Lake and Crane Mountain dominate the view to the east and to the south some low peaks are seen beyond the extensive wetland surrounding Madison Creek. 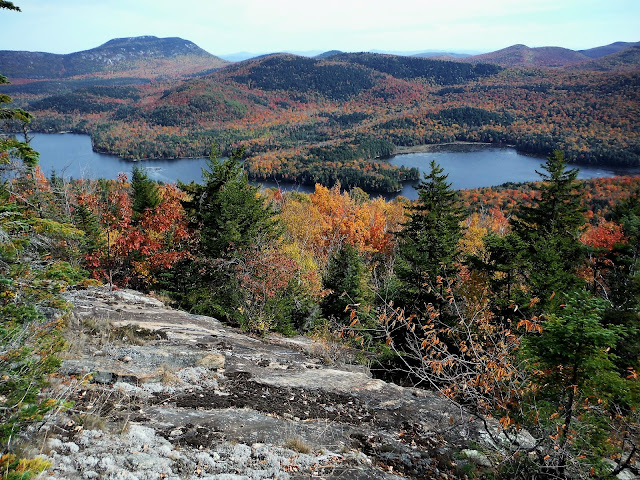 From the parking area there is also a 2.5-mile trail to Round Pond. 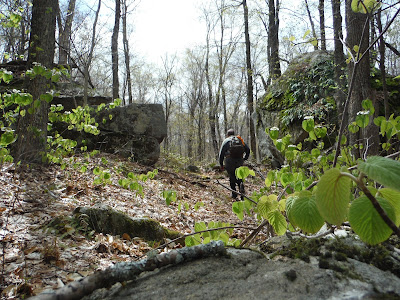 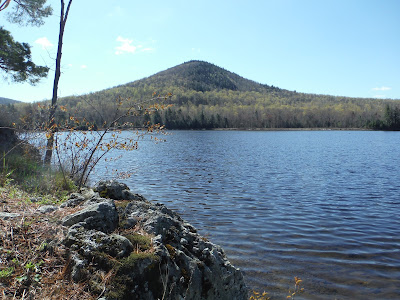 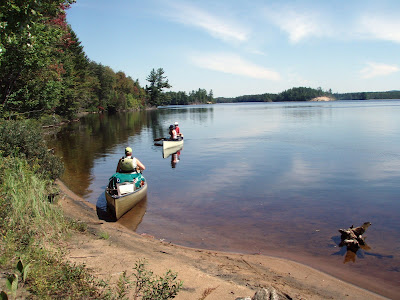 This trip has two great hikes associated with it. From Lows Lower Dam, one paddles 3 miles up the Bog River and across Hitchins Pond. Then there is a carry of up to 200 yards around Lows Upper Dam. A relatively new trail begins next to the Upper Dam – it is only 1.1 miles to Lows Ridge on a well-designed trail that is never too steep. The reward is a great view of the route just paddled with the High Peaks well in the distance; however, most of Lows Lake cannot be seen. 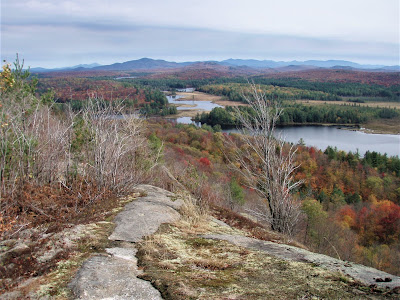 Continuing up the Bog River, one soon reaches a boggy mat that blocks the way – one may have to slide or lift one's boat 20 feet across it on the left. After a few miles, one reaches Lows Lake. Follow the north shore and paddle northwest into a bay passing campsite #25. The north end of the bay is normally very shallow, but persist and land next to a culvert that passes under a dirt road. 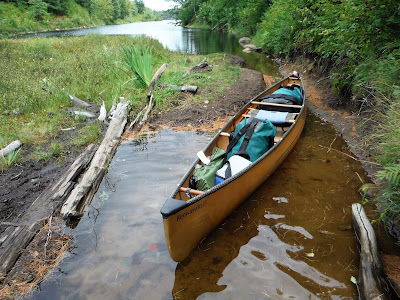 Walk to the left on this dirt road a short distance and look to the right for a path that heads into the woods. The path passes to the left of Silver Leaf Pond then heads generally north. The path may be sporadically marked as it is an unofficial trail; when you start coming out onto areas of open rock, look for rock cairns that can guide your way. The route is fairly steep at times. A large area of open rock is reached below the summit of Grass Pond Mountain after gaining 500 feet over a distance of about 0.7 miles. Much of Lows Lake is seen below and Blue Mountain and the High Peaks can be seen in the distance. Walk west along the ridge to get a view of Grass Pond, the largest bay on the lake. 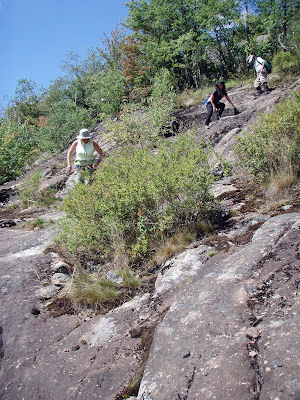 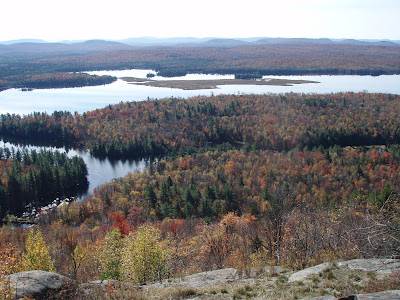 To paddle to the lake and do the hike in one day is quite a trip – figure on about 20 miles of paddling and 1.5 miles of hiking. Many folks make this a camping trip – there are many excellent campsites along the way. Wildlife is plentiful - many loons make their summer homes on Lows and I've also seen a bear swimming in the middle of the lake; moose and bald eagles are in the vicinity, too. 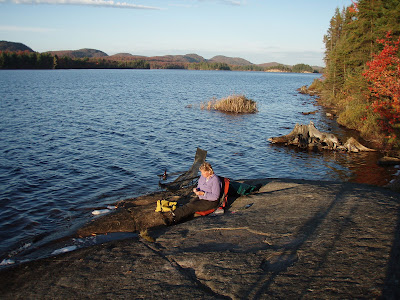 Winds can produce big waves on Lows, so pick a calmer day and preferably a day with clear skies to enjoy the view. The best map is "Paddlers and Hikers Map LOWS LAKE & BOG RIVER" which you should be able to find in any good outfitters shop – this map shows the lake's shoreline more accurately than other maps. 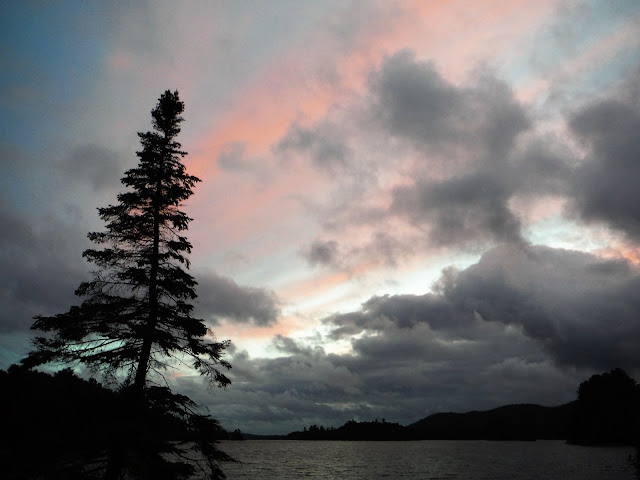 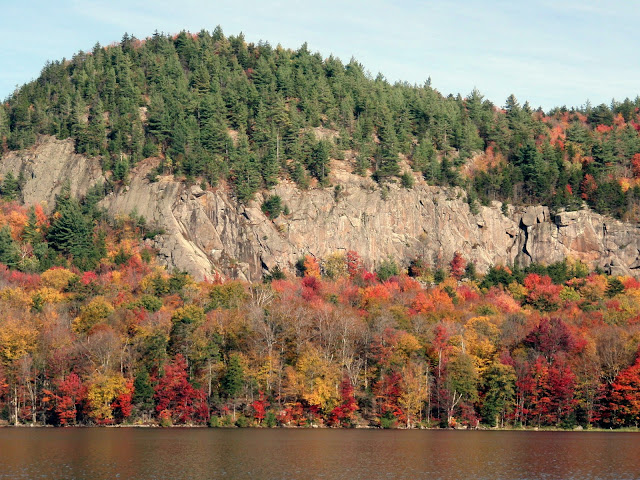 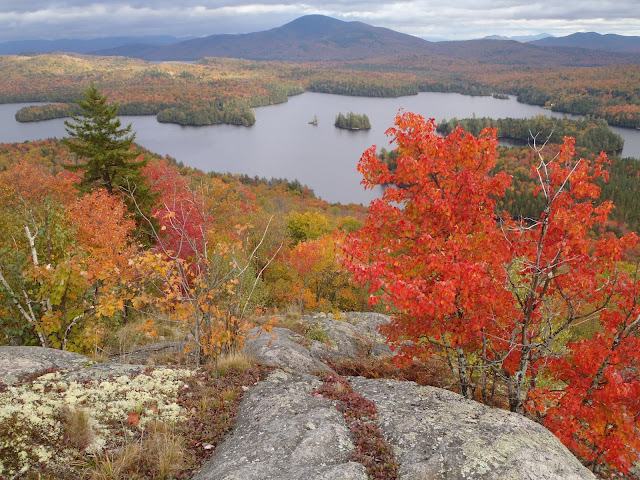 Cedarlands is a former Boy Scout camp a little west of Long Lake on which the state has an easement. Check the NYSDEC website (https://www.dec.ny.gov/lands/108144.html) for a map and the latest information.

The public portion of the easement lands is divided into two areas. The 590-acre Mud Pond Area is open for public use year-round, while the 3,300-acre McRorie Lake Area is open to public use for ten months of the year and is currently closed to the public from June 24 to August 23.

The parking area is on Kickerville Road 2.8 miles north of Route 30. From there one must carry or wheel one's canoe or kayak for 0.75 miles along dirt roads to a put-in on the north shore of Mud Pond. The state does plan to build an accessible 0.4-mile trail from the parking area to Mud Pond's south shore in the near future. 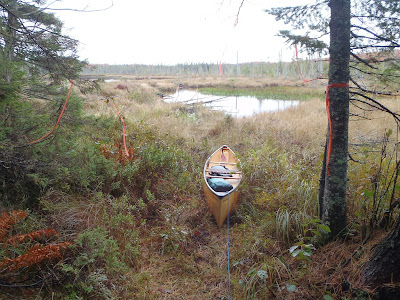 Paddle west and take a right going up the pond's boggy inlet for 0.3 miles then carry 0.2 miles to Fishing Camp Trail, a dirt road. Go left across the bridge then turn right for another 200 feet to put in on McRorie's outlet. It is about a 5-mile paddle around McRorie's cedar-lined shores; Mud Pond Mountain and Rock Pond Mountain overlook the western shore. Look for a new lean-to at a desirable location on the northwest shore - the only other campsite is at the north end of the lake – more campsites are planned for the future. 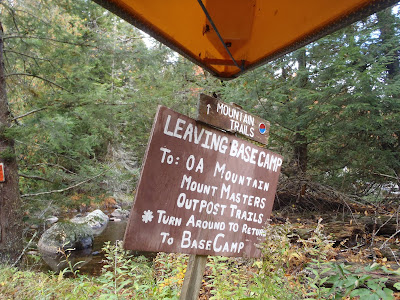 For the hike to O.A. Lookout on Mud Pond Mountain, paddle to the end of the western bay and look to the right for a footpath that soon leads to Fishing Camp Trail. Take a left for a short distance then a right on the lookout trail which climbs 675 feet in less than a mile. The view across the lake includes the Sewards, Kempshall Mountain, the Fishing Brook Range and parts of Long Lake. A fall trip is highly recommended.