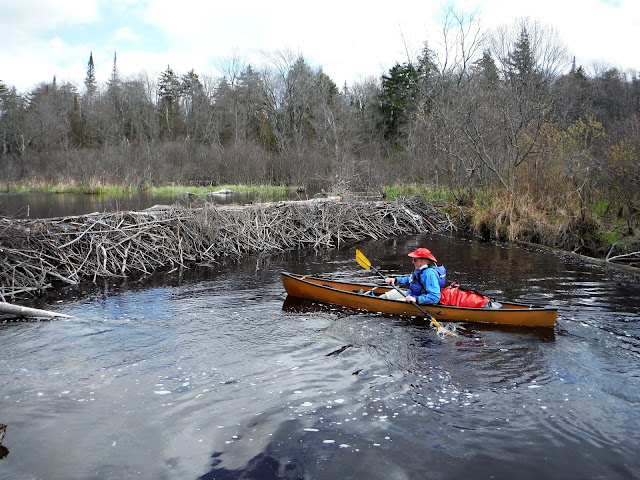 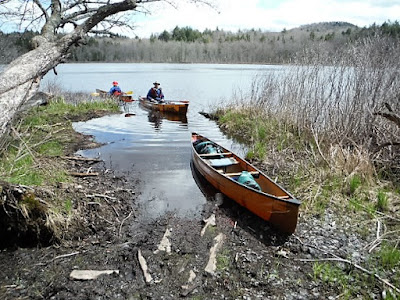 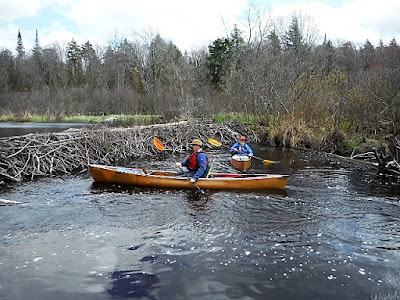 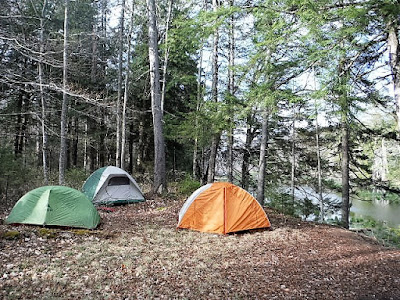 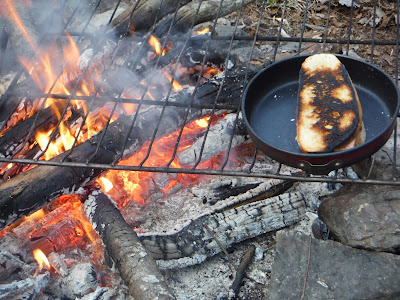 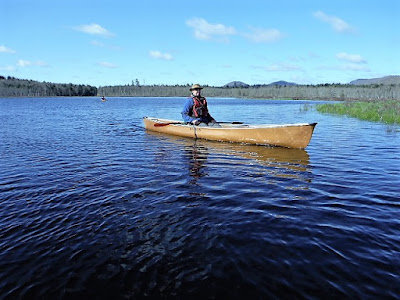 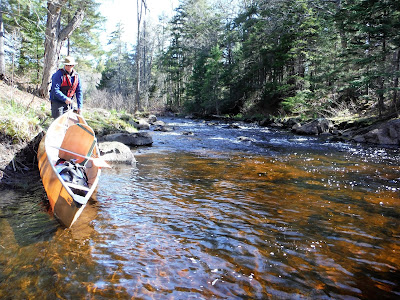 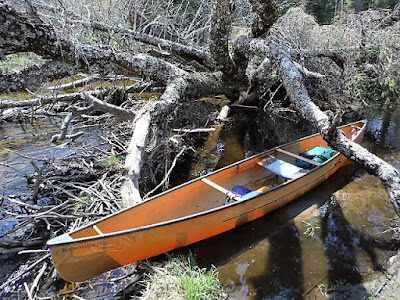 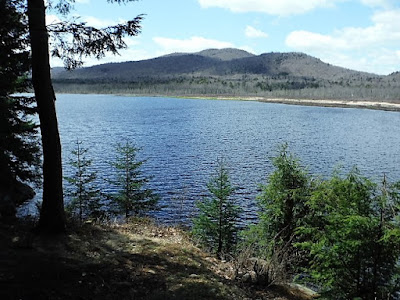 Sep 26, 2011 - FALL STREAM. Had to get out for a shallow rocky spot, beaver dams exist but all were small or breached & no need to get out of the canoe. Varied shoreline from grass to trees, 2 tall pines stand up way above everything else. Mallards; loon on Vly Lake as we lunched at a campsite. More biting flies today, another unusually warm sunny day. Tandem paddled the Reflection 15. 5.5 hours.

Sep 5 & 6, 2010 - FALL STREAM upstream from Piseco. Had 2 beaver dams to get out for (other dams breached, I suspect motorboaters have been taking them apart, water level 1'-2' lower than I've seen before) in the 4.5 miles to Vly Lake. Motorboat at campsite a bit before Vly Lake. The channel into Mud Lake was initially shallow but got better as we hopped over some beaver dams. Mud is a pretty boggy-shored pond, we found the only route to some dry upland for a lunchbreak. Back to Vly & campsite at the N end which has a nice view to the W (hills rise over 1,000' above the lake) across the water, 2 motorboats at the other campsite. After a relatively quiet night & a misty morning we paddled further upstream on Fall Stream, now much narrower than the section below Vly Lake. Soon go over a big beaver dam & water levels became better. We passed the site of a hunter's campsite which had stacks of firewood. More dams & obstructions, the forest closed in & we reached a rapid. Carried the 100' past it & we had more flat water. Passed junction with Willis Vly Outlet. 2 hours after leaving Vly Lake we turned around. Altho the sandy-bottomed stream was getting shallower we could have continued further upstream. Took 1.5 hours to get back to Vly, delayed somewhat by a capsize & recovery (Nehasane to the rescue) after going over a large downed tree. Broke camp & paddled out. Goldenrod & cardinal flower colored the shores; a hint of fall color in the trees. 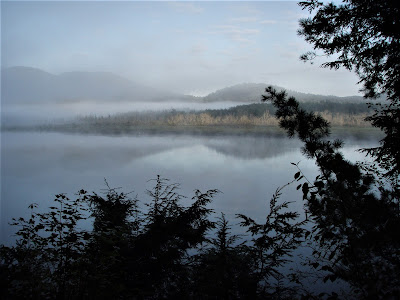 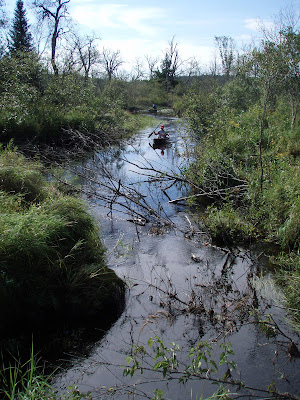 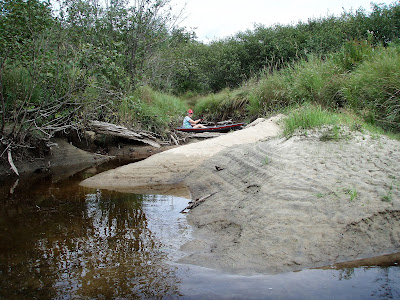 Jul 12, 2009 - FALL STREAM, Piseco. Water level on the high side & we were able to paddle up & over the half dozen beaver dams between Fall & Vly Lakes - can not say that for everyone in our group as a couple of solo canoeists had "incidents". Some private land early on then wild state land rest of trip. Joe-pye-weed blooming. Lunched at a campsite on the only high & dry ground on Vly (nice view) then explored Mud Lake & its boggy shores; pitcher plants, bog rosemary, pink orchids (rose pogonia?). Gb herons, osprey, cedar waxwings, kingbirds; sounds of white-throated sparrow, chicadee, thrush. 11.7 miles, 6.25 hours. Bell Chestnut Prospector, 16' canoe, just loves this stuff! 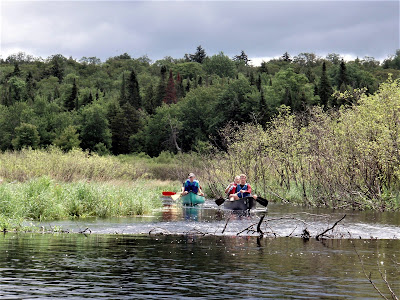 Jul 23, 2006 - FALL STREAM, near Piseco. Upstream from Old Piseco Rd, Fall Stream is a scenic & varied flatwater stream. ~6 beaver dams to go over (all runnable downstream) & one log. One johnboat with motor got thru, otherwise wilderness level is very good. After lunch on Vly Lake we found the channel to Mud Lake which deserves a much nicer name - boggy shores include "fields" of flowering pitcher plants. Deer seen on Vly Lake. Moderate mosquito activity on shore & some deer flies on water as we got more sun & air heated up. 11 miles, 6.2 hours. Bell Northwind, a 17'6" composite tandem canoe. After the main trip switched to a Dagger Reflection 16 (made of Royalex) & ran the rapids (class 2+/easy class 3) under the road bridge.....twice!! Stayed to river right - water high due to rains, had to watch head going under old wood bridge before going under road bridge. 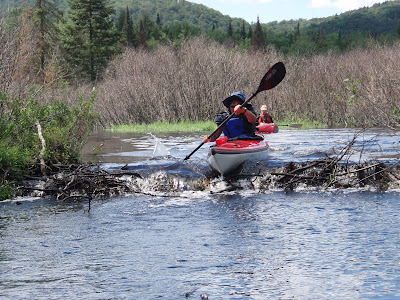 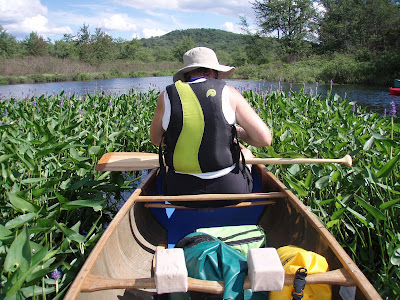