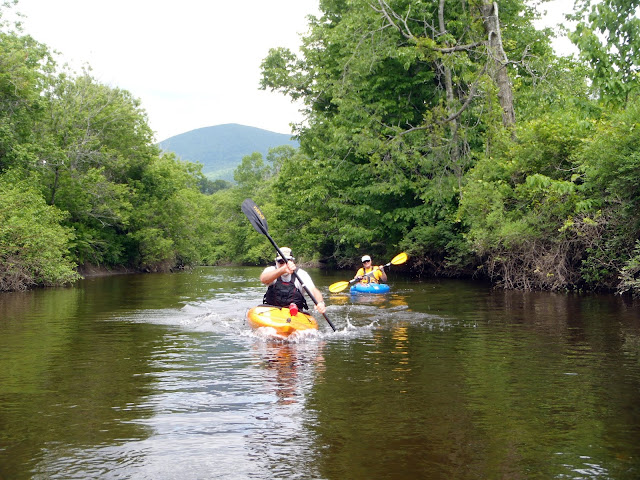 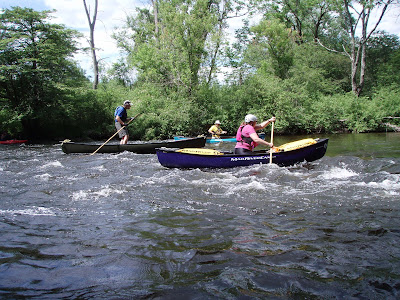 May 30, 2016 - BATTENKILL kayaking, from above the Eagleville Covered Bridge to CR 61 in Battenville. Battenville gauge at 4.8' - a bit low but still fine paddling. Easy rapids, riffles, flatwater, some waves to play in. There was some tree debris in the water between the campground & the big bend (about a half hour from start). Stopped for lunch & swim at end of a long island. More covered bridges at Shushan & Rexleigh. Had to lift over a downed tree late in the trip. Very scenic valley, such very clear water! Eagle, rt hawk, osprey (nest on powerline pole), mallards, mergansers, wood ducks, oriole, sandpipers. Flowers included phlox, yellow flag, forget-me-nots. Avoided the holiday crowds by starting early & not doing the popular Arlington to Eagleville run. 15.7 miles, 5.7 hours.The Battenkill is a fun & scenic paddle anywhere from S of Manchester VT to Battenville NY - many class I rapids, one class II at "The Rock" N of Arlington - good maneuvering skills often required.  River Classifications. 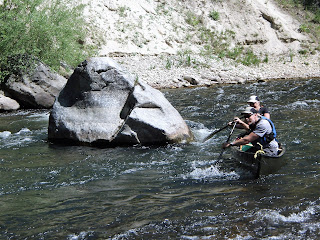 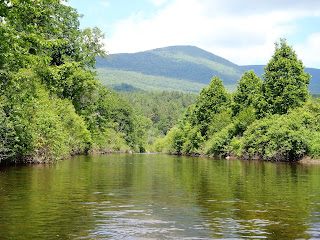 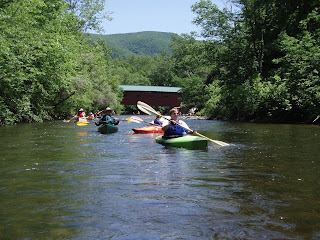 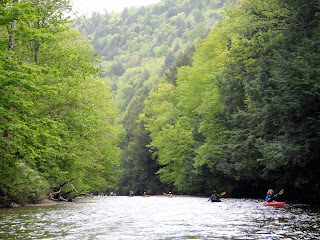 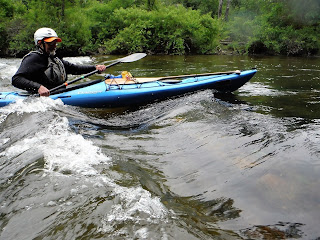 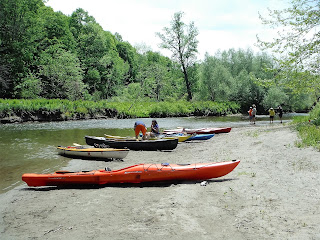 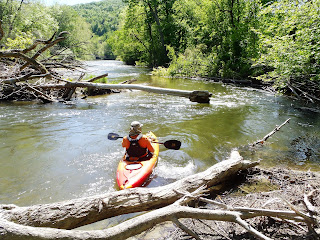 Jun 28, 2015 - BATTENKILL from Rt.313 in Arlington VT to Eagleville NY. Rain overnight. Visual gauge in Arlington read 3.15' at the start; Battenville gauge rising from 4.65' to 4.8' but level at Eagleville rose at least 6" while we were out. Temp in the low to mid 60s - I was very warm in long sleeve base layer with splash top. Windy but winds not really felt down at water level. Some class I rapids in VT section, mostly wave trains & riffles in the NY section. Some strainers/sweepers to be dodged. Surfed some waves. Not wilderness but a very scenic valley. Lots of birds incl. cedar waxwings, swallows, kingbirds & cute merganser chicks. 11.5 miles, 3.3 hours. 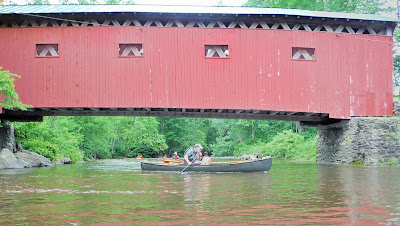 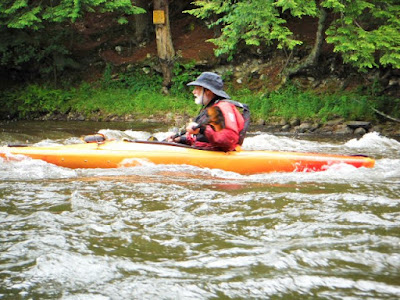 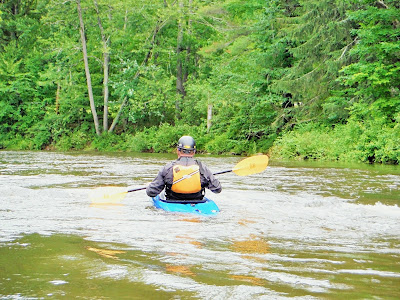 May 31, 2015 - BATTEN KILL from NY/VT state line to Rt. 22. Battenville gauge at 4.4' when I left the house but rose to 4.8' by the time we finished paddling. Cloudy, cool (low 50s) but no rain. Had the stream to ourselves, no other boaters, just a couple of fly fishermen. 3 covered bridges (Eagleville, Shushan, Rexleigh), minimal development. Always enjoy playing in the wave at an old dam a little before the Tacklebox Bridge (CR 61). After passing the campground but before the stream turns N: there is tree debris in the stream that needs to be maneuvered around in current (2 of our group capsized) & a bit further there was a sycamore tree downed across the water, one can get under it on the L. Eagle, woodchuck, kingfishers, lots of swallows flying low across the water. 12.6 miles, 4.5 hours. 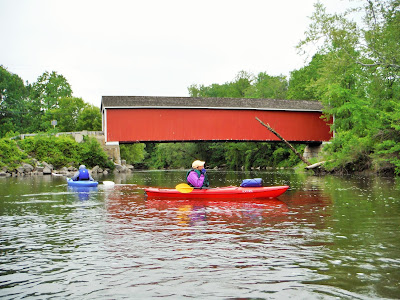 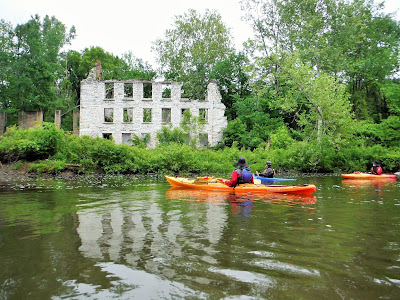 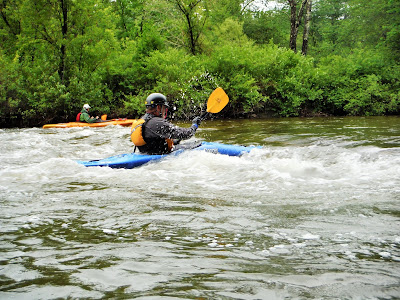 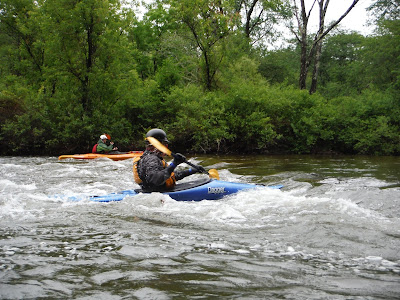 July 27, 2014 - BATTEN KILL from Rt.7A N of Arlington VT to picnic area past VT/NY state line.  Waited out a morning storm & killed some time with brunch in Cambridge.  Battenville gauge 4.7' & rising (peaked at 5.72' 12 hours after the rain stopped); visual gauge at the Rochester Bridge (Rt.313 in Arlington) 3.2' when we paddled by, 3.9' after the trip (most previous trips this gauge has been in the 2.2-2.5' range) - lively (waves often in the 1.5' range), the usually crystal clear water was a murky brown this time.  Some flat water to start then Roaring Branch enters on the L &  "The Rock" lurks ahead - I went to the R of it where the main current goes, a gap of a few feet between rocks + a small drop, watch out for more smaller rocks below - the only real Class II rapid on the BK between Manchester VT & Battenville NY.  Much carnage: don't worry, Nehasane stayed dry in the Caption but 1 of our kayakers, getting used to a new used ww kayak, capsized 5 times & rolled up 3 of those times!.  Rapids generally Class I/I+.  Later, a canoe misread the current & ran into a sweeper tree, rescue was fairly easy (all of our boats had float bags or bulkheads).  Stopped for a late lunch on a rocky beach on the R where the Green River enters.  We did not notice the water level rising until Baja noticed we had 6 paddlers & there were only 5 boats remaining, one of the canoes had sneaked off undetected.  Fortunately it was stopped by a strainer 200 yards downstream, ropes were attached & folks were able to pull it out, luckily the paddle stayed with the canoe!  The PFD was found a mile downstream!  Under the West Arlington covered bridge.  The last 4 miles were less eventful with easier rapids. Mergansers, kingfishers, cedar waxwings, cows & a triceratops.  11 miles, 3.6 hours. 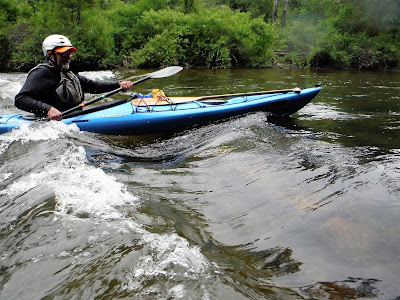 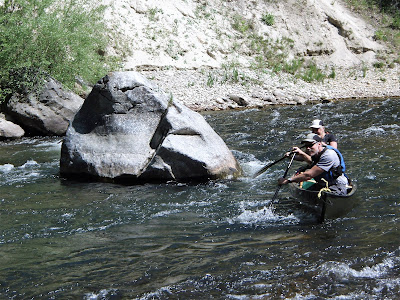 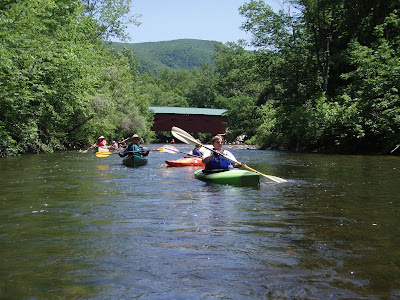 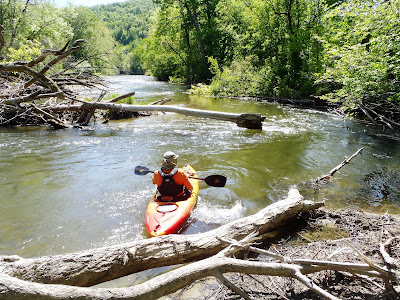 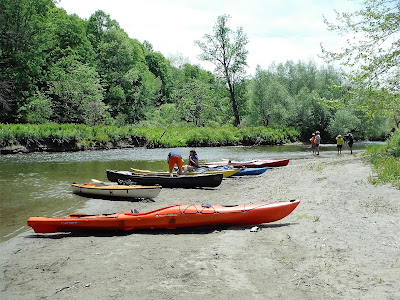 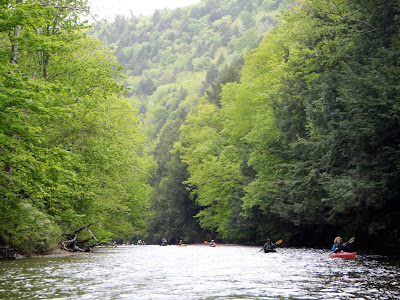 June 15, 2014 - BATTEN KILL from Rt.313 in Arlington VT to CR 64 in Shushan NY.  Battenville gage at 5.35', visual gage in Arlington (on Rt.313 bridge, downstream side, river L) at 2.85' - nice easy level.  Quickwater, riffles & class I rapids.  Vermont part very scenic but some roadnoise, New York section is away from roads.  2 covered bridges.  Downed trees we had on June 1 have been cut out.  Some fun surfing waves along the way.  Goslings, merganser chicks, cedar waxwings.  15 miles, 5.5 hours excluding shuttle.

June 1, 2014 - BATTEN KILL from Eagleville to CR61 bridge in Battenville.  Battenville gage at 5.35' - a nice level altho I find lower levels more interesting due to having to maneuver & read-the-river more.  3 covered bridges.  Sycamore tree down across the stream below the campground - short easy portage on river R; then another tree down - able to scoot across it on river R but portage might be needed if water level gets lower.  Quickwater, riffles & class 1 rapids; some surfing waves.  Deer, osprey nest.  15.3 miles, 5.6 hours.

June 10, 2911 - THE BATTENKILL from Richville Rd a little S of Manchester Village VT to the picnic area at the NY state line.  Battenville gauge at 5.14', visual gauge in Arlington at 2.5' - hit a few rocks but never got stuck.  The 1st 4 or 5 miles is fairly flat with some riffles & a logjam we had to get out for - being further from main roads it is quieter than downstream with very nice scenery incl. Mt. Equinox which rises 3,000' above the valley floor & The Burning in the Lye Brook Wilderness rising almost 2,000' to the S.  The stream has changed some since Irene - at "The Rock" class 2 section there is less deep route on the outside & the tree that was jammed to the R of the rock is gone & now you can paddle either side of the rock.  After that there are some class 1+ rapids then mostly class 1.  Found some surfable waves en route.  Mink, cows, orioles.  15+ miles (East-Central guidebook says 15 miles but I'm sure it is 2 or 3 miles more), 6 hours. 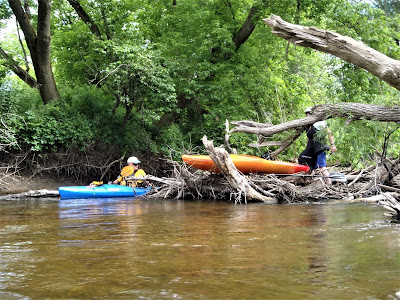 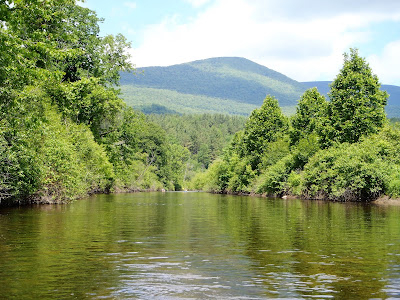