I enjoy getting away from civilization and always look forward to visiting the wild areas of the Adirondacks. However, in most years, Adirondack waterways do not become ice-free until at least the middle of April and many ponds and lakes may not open up until the end of the month. There are several good options in the lowlands outside of the park though - the Kayaderosseras Creek in Saratoga County is one of them.

One can paddle the Kayaderosseras (most folks pronounce it Kay-duh-ross) as a one-way downstream trip or do an up and back trip from one launch spot. Spring water levels are usually good and there is some current – it may be a bit more work paddling upstream but you can be assured that the return downstream will be easier.

Before you paddle the “K”, check out the website of the Friends of the Kayaderosseras (https://kayadeross.org/) for any updates and information on their spring clean-up days on April 28 and May 4.

From Rock City Falls to Ballston Spa, the creek is mostly whitewater of up to Class 3 – it is not paddled often due to its many strainers (downed trees). From Kelly Park in Ballston Spa to Saratoga Lake, the creek is mostly flatwater for over 10 miles with a couple of sections of quickwater. In the first two miles from Kelly Park there may be some blockages that require getting out of the boat, hence paddlers may find it easier to start from Gray's Crossing a bit further downstream – from Route 50, drive east on Northline Road for 0.7 miles and look for a sign on the right; parking is in a field that also serves the Burl Trail for hikers – this is a section of Saratoga Spa State Park. Below Gray's, the creek splits around an island - the R is blocked,the L route may need some maneuvering to avoid a partial blockage (2020). Mileages stated below are from Kelly Park.

At 4.5 miles, Geyser Brook comes in from the North – in spring high water and with the willingness to lift over beaver dams, it may be possible to paddle up it to within view of the Saratoga Performing Arts Center – I have only gone a very short distance along it myself.

Before reaching the Driscoll Road put-in at the 6-mile-mark, you may experience a drop through the remains of an old dam and then a stretch of quickwater. It is a bit of a carry (wheelable) from the parking area to the water here but a stream-side picnic table makes it a good place for lunch or a rest break.

Soon after Driscoll Road, one passes under Route 9 then, after going another 1.2 miles, one goes under I-87, the Adirondack Northway. As one continues downstream, it is nice to leave the traffic noise behind. 2 more miles of pleasant winding stream leads to the narrow outlet of Lake Lonely – it is possible and highly recommended to paddle the 0.9 miles to the lake.

From the mouth of Lake Lonely Outlet, it is another 1 mile to Saratoga Lake. Logs and debris often jam in this section and you may have to squeeze past some downed or overhanging trees or, at worst, get out and portage around. Turtles like to sun themselves on the logs; inevitably, they will plop into the water before you get too close. Look for the orange of orioles flitting about, as well as the ubiquitous kingfishers, wood ducks and great blue herons.

The shores of Saratoga Lake are fairly developed and, in summer, can be buzzing with motorized watercraft, however, things are quieter in spring, especially on weekdays. A tour of the lake's circumference is about 12 miles. 2,000 feet of the lake's northwest shoreline, the Manning Cove Preserve, is undeveloped – in summer, the shallow sandy-bottomed area is attractive to motor-boaters who moor here and swim from their boats.

Fish Creek is the outlet of Saratoga Lake and, in essence, is the continuation of the Kayderosseras as it makes its way down to the Hudson River. It does see some motorized traffic but it also does have some interesting shoreline and tributary creeks to explore. From the state boat launch, it is 4.5 miles down to Bryants Bridge, which makes for a good turn-around point since there is a dam not far downstream.

A quieter section of Fish Creek can be accessed from Mennen Road in Victory Mills where one can paddle upstream for 3.8 miles to the dam in Grangerville. There are signs of civilization at the bridges but much of the route passes by low, undeveloped shores of willows and silver maples. In spring, the current is noticeable but, as mentioned earlier, it will be an easy return back to your car. 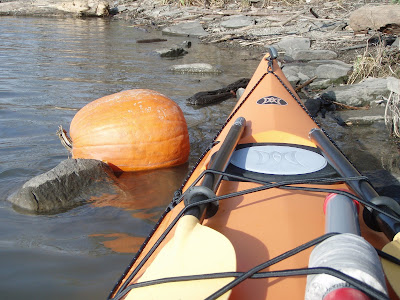 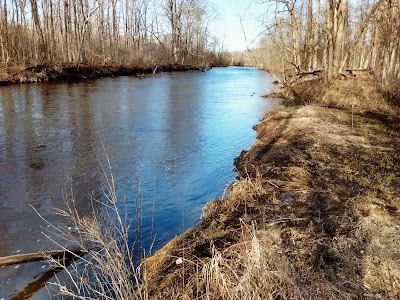 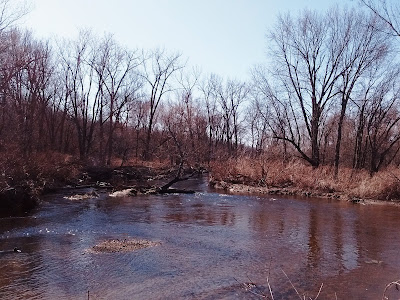 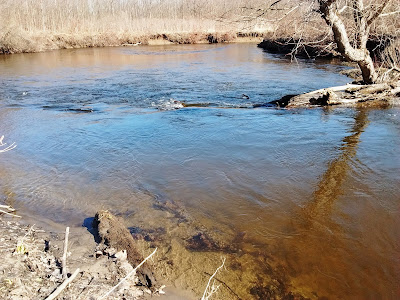 Aug 26, 2015 - SARATOGA LAKE, KAYADEROSSERAS CREEK & LAKE LONELY OUTLET kayaking from Waterfront Park at the N end of SL. The lake is heavily developed but 2,000' of shoreline (Manning Cove Preserve) is undeveloped on NW shore S of the mouth of KC - a shallow sandy-bottomed area is attractive to motorboaters who moor here & hang out & swim. Lots of aquatic vegetation in shallows. Reached Saratoga Lake Sailing Club then turned around. Went a mile up undeveloped KC passing many turtles basking in the sun on logs. Took a R up LLO for 0.9 miles to bridge - tight & shallow in spots. Back on SL motor traffic was moderate - I would not want to paddle here on a summer weekend. 2.7 hours. Dagger Alchemy 14 kayak. 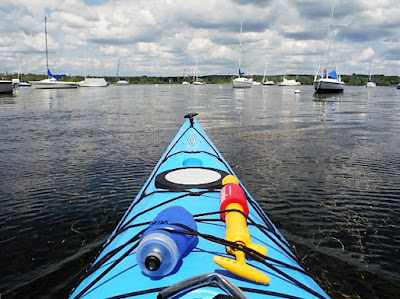 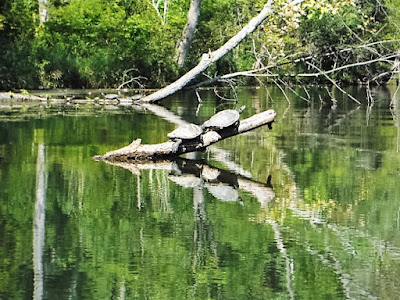 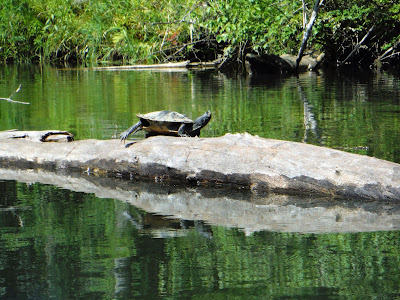 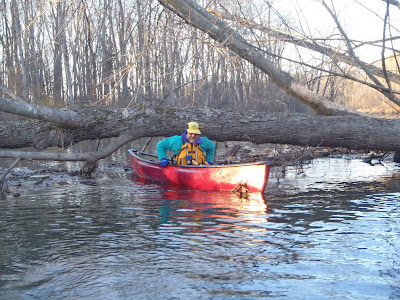 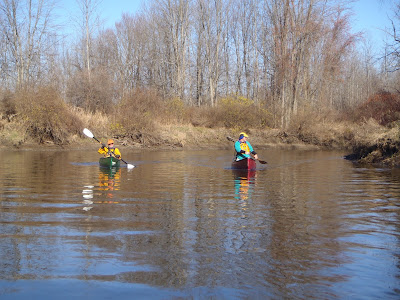 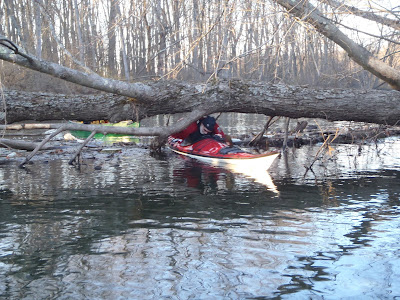 Nov 12, 2007 - KAYADEROSSERAS CREEK from small parking area at the end of Arrowhead Rd.  200 yard carry down to the creek; water low, muddy launch.  This puts you on the K just before it enters Saratoga Lake.  Headed upstream.  Ice in the marshy area.  Good to see the old logjam removed - piles of logs & debris now on shores.  See a raccoon napping on shore, it looks up at us for a couple of seconds then curls back up to snooze.  Cardinals, wood ducks.  Shallow in spots, noticeable current, turned around just past Rt.9 bridge where there was a small rapid.  9 miles, 3.8 hours.
?? - through paddle from Kelly Park in Ballston Spa to Saratoga Lake. 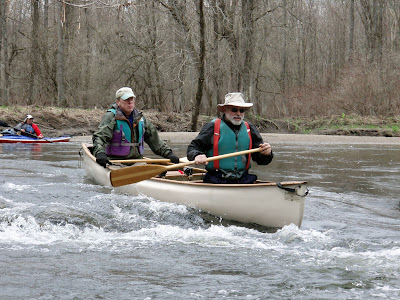