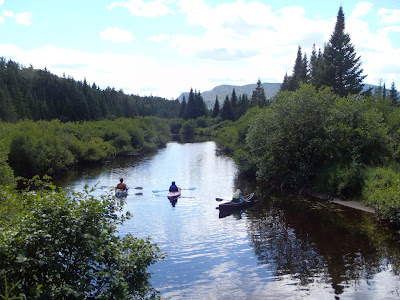 CEDAR RIVER FLOW. Late September 2019. I was hoping to get campsite #6 which is where the NPT comes closest to the flow - so one gets access to both water & trail. But, there was a motorboat moored there & a large group of 12 (a permit is needed for camping groups of more than 9 people http://www.dec.ny.gov/outdoor/41282.html ) from PA was camped there for 7 nights (a permit is needed if camping at the same site for over 3 nights). There was a large 10'x30' tent/awning set up & some hammocks, some fine wood furniture, camp chairs, several large coolers (no bear hang), condiments were left out on the table, a good face cord of firewood (don't know if it was gathered on site, it is against the law in NYS to transport wood more than 50 miles), a few canoes & kayaks too - this outfit was not roughing it! I was both outraged & jealous!!! Went back after they left & took a look - still some nice tables there, a wood pommel horse?, a fair amount of firewood, but no trash - nice! 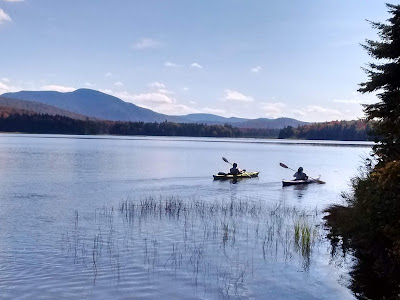 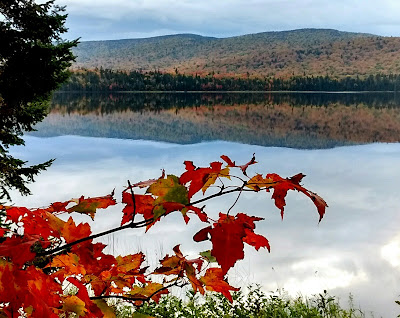 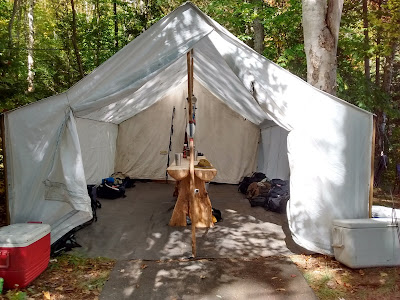 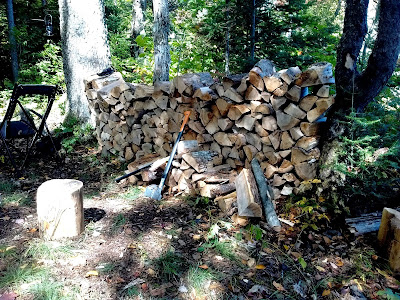 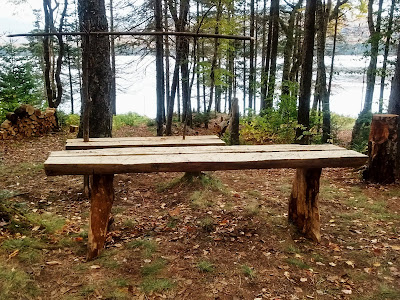 CEDAR RIVER FLOW. Late September 2019. 2,100' el. I wanted an E-facing campsite to get the warming early morning sun, so I headed for campsite #6 Ice House Landing where the NPT comes closest to the flow. Unfortunately the site was already heavily occupied (see separate post) so I took #7 which has an above average landing, privacy, views & swimming, not too flat tho; thunderbox privy; balsam, spruce, maples. Views: Buell Mtn to the E, Lewey Mtn (3,742') to the SE, Blue Ridge to the S (3,860'+, 2nd highest mountain outside of the greater High Peaks, cliffs, higher than the Blue Ridge in the Blue Ridge Wilderness to the N, too many Blue Ridges! Colvin called this one Cloud Cap, a much better name), I could see the fire tower on Pillsbury Mtn (3,597') to the far S. Seen/heard: loons (incl. a juvenile), C geese, barred owls. Day 2 - rain predicted, nice sunrise tho. Bushwhacked 10 minutes to the NPT (on an old road here - easy walking) & headed S - soon started raining. Made it to the Carry Lean-to on the Cedar River in ~1 hour & stayed 2.5 hours until rain stopped. Started back to camp & it started to rain lightly! Ankle-biters came out when it was warmer, Temp range 45-70F, fairly windy, colors near peak, surprisingly not too busy, very quiet 97% of the time, 3 motorboats, no road noise. 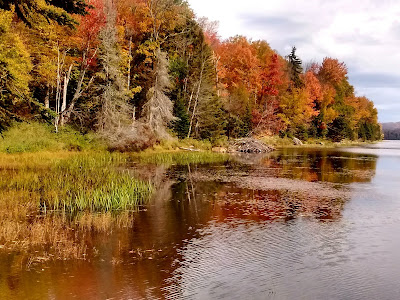 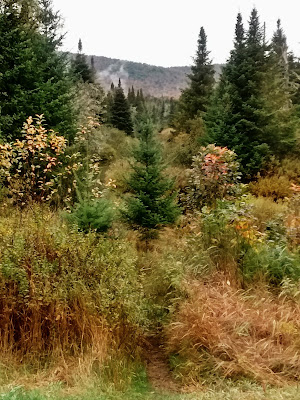 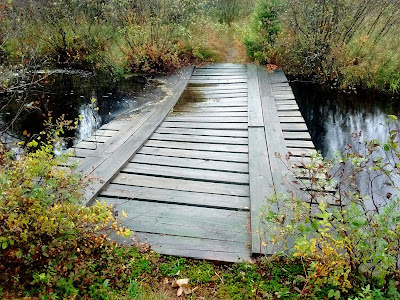 Aug 11 & 12 - CEDAR RIVER FLOW canoe camping. Lots of folks camping at the Wakely Dam put-in but only 2 other backcountry campsites were occupied. Hoping to see the Perseid meteor showers but clouded over in the evening. Thunderbox at our campsite, possibly at others. Loons not too vocal. After setting up camp paddled up Buell Brook until it got too shallow then up the Cedar River past the lean-to. Area surrounded by mountains that rise over 1,500' from the flow, Wakely's firetower often in view - very scenic. Monday: paddled back up the river to a backwater near a campsite & picked up a path that soon reached an old 4WD road (used as late as 1987, parts had new maples growing densely, will be very hard to follow in a few years). Went E 2+ miles with Little Squaw Brook to our S but out of sight. Took a R & R again to circa 1960 Studebaker Lark wagon & a small van. Lunched below at LSB. No bad bugs in camp or on the water; mosquitoes & non-biting flies on the hike. A couple of small motor boats out but still mostly very peaceful. Wenonah Wilderness, a 15'4" solo canoe, this one made of tough Royalex - Wenonah & Mad River have raised prices of Royalex canoes hundreds of $ - the end of Royalex story. 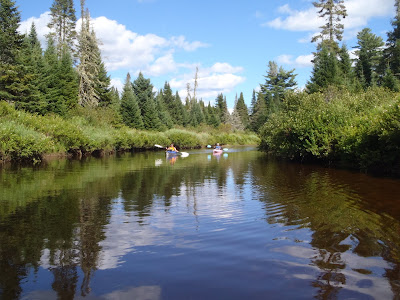 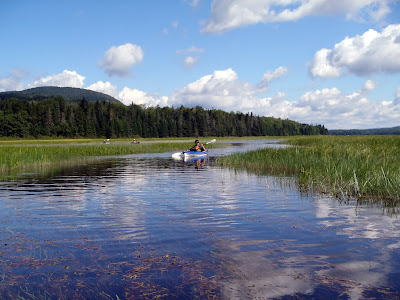 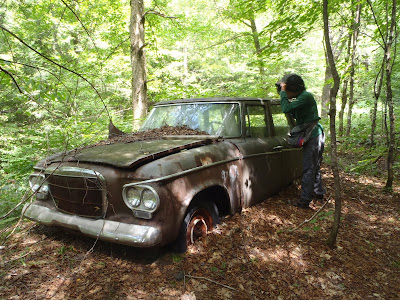 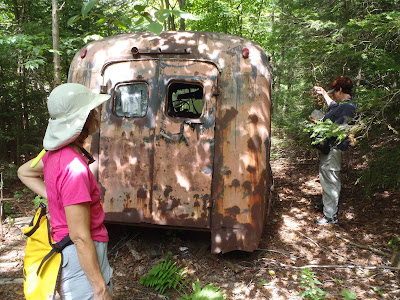