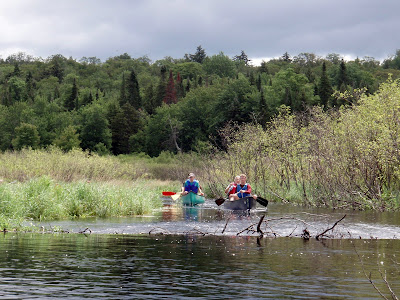 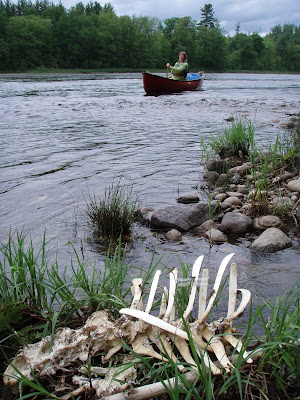 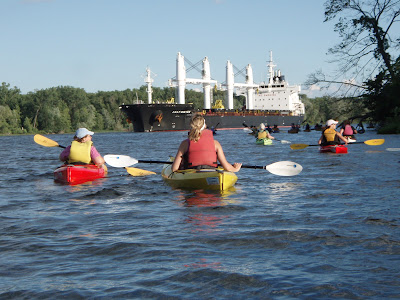 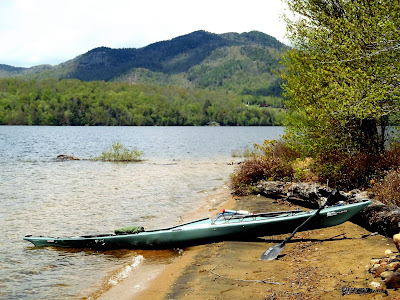 SPRING PADDLING GUIDE 2015 Spring has arrived on the calendar but as I write this in late March most bodies of water in upstate New York are still topped with ice and snow. Although I enjoy spring skiing my thoughts often drift toward the upcoming paddling season and I start planning some early season trips. First of all one must consider the fact that once the ice is out the water temperature is still only just above the freezing mark. A dry suit or a wet suit should be worn whenever there is a probability of a capsize – most experts agree that would be the case in most any paddling situation. At a minimum, one should avoid cotton clothing and wear a life jacket (aka PFD – personal flotation device). In New York State the law says you must wear a PFD when paddling from November 1 through May 1. Personally, I think the State should extend this to June 1. On May 1 this year some lakes in the Adirondacks might still have ice on them – the way this spring is going my bet is that Blue Mountain Lake will still have some ice on it in early May. In our area the tidal Hudson River will likely be one of the first bodies of water to become ice-free. Unless you understand how the tides and winds affect the river's surface you might want to stay away until the water temperature rises above 60 degrees – for example, a south wind during an ebb tide can produce waves of well over a foot in height. If you are desperate to wet your paddle as soon as possible you can take advantage of indoor pool sessions offered by certain institutions. For example, in the Capital District the Duanesburg Area Community Center offers pool sessions for paddlers on Thursday evenings in April. These sessions are a great opportunity for folks to practice rescues, rolling and other skills. Most years I like to head south in April in search of warmer water and warmer air; somewhere between southern New Jersey and North Carolina usually does the trick for me. The rivers of New Jersey's Pine Barrens are very attractive if you like twisty streams with some current. The Delmarva Peninsula, sandwiched between Chesapeake Bay and the Atlantic Ocean, offers a plethora of choice fresh water and salt water paddling destinations as does eastern North Carolina. Locally, popular paddling destinations such as the Mohawk River and Round Lake will see some kayak and canoe use well before the end of April. The Albany Chapter of the Adirondack Mountain Club (ADK) and Meetup groups will have flatwater trips planned and the Schenectady Chapter of ADK will have started into its whitewater schedule. My personal preference is for wilderness paddling destinations – the less signs of civilization the better. I like to get out for some overnighters in the Adirondacks somewhere between ice-out and blackfly season. Will blackfly season start later this year if ice-out is later? Only time will tell. .Early May is prime-time for me. Daytime temperatures can be anywhere from the 30's to the 70's and overnight temperatures often dip below freezing. I have taken a brief swim in shallow water on Little Tupper Lake on one weekend then paddled Lake Lila and Shingle Shanty Brook in snow showers on the following weekend (and did I mention the waves as a result of gusty winds?). No bad bugs though! On windy days I lean toward streams and ponds rather than big lakes. The Raquette River between Raquette Falls and Tupper Lake offers good mileage and several campsites and lean-tos along its shores. Motorboats are allowed on this stretch of the Raquette but I doubt you'll see more than one or two on a fair day in May especially on weekdays. The ponds within the St. Regis Canoe Area as well as the ponds surrounding Fish Creek to the south of the canoe area offer a multitude of possibilities for day or multi-day trips. There are many streams in the southern half of the Adirondacks that make for lovely day trips. These include the Kunjamuk River, Fall Stream, the Jessup River and the Miami River. From either bridge on NY Rt.10 one can paddle the West Branch of the Sacandaga River from which one can access Good Luck (best for camping), Chub and Trout Lakes. Another consideration when trying to access Adirondack lakes like Lake Lila, Lows Lake, Cedar River Flow and the Essex Chain Lakes that require the paddler to drive on dirt roads is that these roads are closed through mud season and may not open until the road has dried out sometime in May. Last year the road into the Essex Chain Lakes was washed out in several spots and did not officially open until June 27th. Updates on road openings can be found on the NYSDEC website at http://www.dec.ny.gov/outdoor/7865.html I predict that this spring will bring many warm sunny days so go ahead and start planning those canoe and kayak trips. A good guidebook will cost you less than a dinner at a restaurant and keep on returning on your investment for years to come.