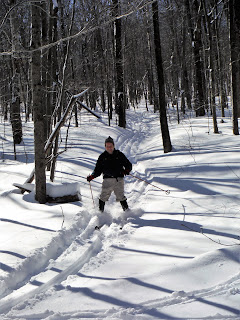 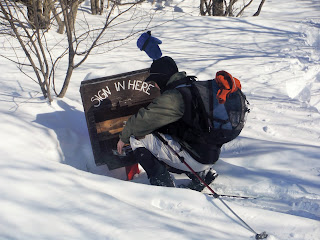 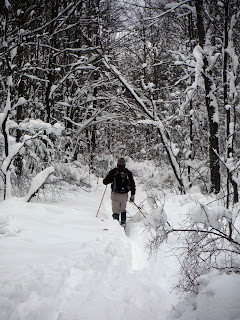 Oct 21, 2017 - SNOW HOLE & BALD MOUNTAIN hike & trail clearing, from Petersburg Pass. An Albany ADK http://www.adk-albany.org/ trip that included some trail maintenance - I was nail & hammer guy & got to add/fix trail markers. Taconic Crest Trail mostly in NY, partly in VT here, stays just W of MA. Hopkins Memorial Forest https://hmf.williams.edu/ . Cleared area ~2 miles in - they have tried to revert this section to what it was some years ago to attract certain flora & fauna. White Rock & views to Catskills. Snow Hole - no snow/ice. Steeply up Bald Mtn (summit is treed) & down 100' on its N side, filtered view NW across N half of the Rensselaer Plateau, before turning around. Short bushwhack up Smith Hill for view of Mt Greylock. Mostly beech, maple & yellow birch. Flowering: smartweed. Elevations from 2,100' to 2,500' - foliage past peak but some good color down below at ~1,000'. Temp rising to 70F again. 8.2 miles, 6 hours.

Feb 14, 2017 - HOPKINS MEMORIAL FOREST ski from Petersburg Pass (elevation 2,100'). Spotted a car at the Rosenburg Center in Williamstown. N on the Taconic Crest Trail, used skins the initial 0.25 mile climb. Off-trail to the E up Jim Smith Hill (elevation 2,360') - nice views of Mt Greylock, Raimer & Berlin Mts. Back to the TCT for a bit then R on the Birch Brook Trail which drops 1,000' in 1.4 miles, leaving NY & entering MA - heavenly powder! R on the Upper Loop which climbs for a while (1,400') before dropping to cross the North Branch Birch Brook. Climb a bit, straight at a junction on the Lower Loop - the Canopy Walkway seen to the N. Continued past the Rosenburg Ctr (850') & down another 250' to the Hoosic River (elevation 595') then back up to the RC. Excellent skiing on 1'-2' of powder. Whitetail deer. 8.1 miles, 4.2 hours (excluding shuttle time). http://hmf.williams.edu/

Nov 22, 2016 - GRAFTON LAKES STATE PARK ski, from Mill Pond. Intended to ski Dyken Pond EEC but the road in was just plowed to the last house, the center's road was untouched! Soon passed a graveyard then R on Spruce Bog Trail (orange), snowshoers had broken trail for about a half mile. An easy climb then the rest of the way was fairly flat. Took a R at a bench onto the yellow trail (Spruce Ridge?) which returned to the orange trail after ~1 mile, at one point we did lose the trail for a bit. Continued NE on the orange trail to some blowdown before turning back. Skiing back in our tracks was nice. Pleasant & quiet woods. 15"-30" of snow! Still hit some rocks. 2.5 hours.


Dec 28, 2015 - PETERSBURG PASS hike, from parking area on Rt.2 1.8 miles SE of the pass. Mostly in Taconic Trail State Park. Sara Tenney Trail crosses the road here; to the S it drops down into Treadwell Hollow before climbing up to the pass. Not wanting to lose elevation before climbing I bushwhacked W thru open hardwoods & after over a half hour picked up an unmarked old woods road. Actually it was more scenic & easier walking alongside the brook than the "trail", passed a dilapidated old house then a stone marker at the MA/NY border. The top of the trail at PP is well-hidden from the parking area - it is close to Rt.2 & screened by some small white birches. Crossed Rt.2 & headed N on the Taconic Crest Trail in Hopkins Memorial Forest - frost & a dusting of snow above 2,100'. R on Shepherd's Well Trail - the well is soon seen in the woods on the L. After an easy climb reached open area at 2,350' with pole & equipment measuring wind & temp. Narrow trail continues to a view of PP, Mt Raimer, Berlin Mt, Mt Greylock & a distant wind farm. Trail starts dropping more steeply & gets wider soon joining the RRR Brooks Trail, a moss-covered old road which runs parallel & close to Rt.2 dropping gently down to junction with Sara Tenney Trail. L on STT & over mowed hill with views. Picked up Bob's Ski Loop on other side & took that to top of Birch Hill then down to L on Hunter Family Ski Loop which drops down fairly steeply to junction with STT. Flora Glen is way down below, back to start mostly uphill on STT. 4.8 hours. Looking forward to skiing here.

Dec 7, 2015 - NEWCOMB POND hike to newest addition at Dyken Pond EEC. N on Abt Farm & Old Road Trails. Continued N on unmarked old road. Passed a wet area then a field on the R, soon after there is a small tree stump with a pink ribbon on it on the L which is a continuation of the "proposed trail". Occasional orange or pink ribbons mark the way W, cross a dirt road & continue SW then wind down to dark hemlock woods & NP 1.5 miles from the parking area. Crossed the inlet on a beaver dam & a path continued on the other side soon leading to a good wildernessy spot pond-side. A small painted turtle was taking in its last rays of the year; I basked in the sun too (temp in the 30s). Returned past The Sentinels boulders, McFalls Trail, looped on Cherry Trace then down to mostly iced-over Dyken Pond. 4.2 miles, 2.3 hours Map.

Dec 6 - BERLIN MOUNTAIN hike from Petersburg Pass (2,080' el). Taconic Crest Trail. Highest mountain in New York state outside of the Adirondacks & Catskills. Temp rising to 50F, sunny in the hills, fog in the valleys. The TCT climbs 400' around the W side of Mount Raimer before dropping down 250' to Berlin Pass then climbing 600' to the summit at 2,818'. View mostly to MA (Mt Greylock) & VT (Mt Equinox) but could see Catskills too. Side-trip up Mount Raimer (2,585' el, site of the old Petersburg Pass Ski Area) on the return. 5.9 miles, 3.9 hours.

Feb 17, 2014 - SNOW HOLE.  Taconic Crest Trail from Petersburgh Pass (el 2,080') Rt.2 on the NY/MA border.  2-3' of snow (perhaps too much?!) - very good skiing in & out of snowshoe tracks, uphills a bit of work in the troughs.  Bare-booted the initial steep section from road to kiosk but skied it on the way back.  Great view from White Rocks lookout (2,300') 2.5 miles in - the Taconics, across the Rensselaer Plateau to the Catskills.  Williams College/Hopkins Memorial Forest has cut down most trees on a hill before White Rocks to attract flora & fauna that was found here in the past.  The grotto-like Snow Hole did have snow in it,.  Most of the trail is in NY but a section is in VT.  Short side-trip on Birch Brook Trail which eventually drops 1,500' to Williamstown - nice conditions for that.  Mostly intermediate with one steeper hill.  6 miles, 4.7 hours.

Jan 10, 2010 - DYKEN POND ENV. ED. CENTER.  Plenty of nice powder snow.  Did most trails around perimeter and played on the hill near the parking lot.  Dyken has close to 10 miles of trails - trails to N thru mostly hardwoods.  Check out The Sentinels, a tricky downhill with turns around a couple of boulders.  Trails S of the access road mainly thru evergreens and open beaver meadows.  Enough tricky hills to make this intermediate.  6.5 hours.


Jan 11, 2009 - THE SNOW HOLE & BALD MTN.  Taconic Crest Trail from Petersburg Pass at NY/MA border (~2,000').  Quite a few cars here ahead of us at 10:30am - telemark skiers & boarders like the old ski trails on Mt. Raimer.  Great conditions - good base topped with over 6" powder.  Very steep hill at start can be walked or skinned; one more fairly steep hill but intermediate overall.  Had to break trail over half the way.  Nice view from White Rocks a little before the Snow Hole.  Continued on to Bald Mtn (2,480'), trail gets very steep, found unmarked trail to the L which was less steep, used climbing skins, no open views.  7 miles, 5 hours.

Mar 3, 2008 - HOPKINS MEMORIAL FOREST.  From the Rosenburg Center skied the Hoosic River Trail on up to 6".  Nice to see the river from this perspective.  Some commercial development on opposite shore.  3 miles, 1.5 hrs.  Left the Nehasanemobile at RC & drove up to Petersburg Pass Rt.2 at the NY/MA border.  Skied N on the Taconic Crest Trail (tracked by skis & snowshoes) for 1 mile (couple of steep uphills near start) & took a R onto Birch Brook Trail.  Dropped 1,100' in 1.5 miles (untracked, what fun!  Trail wide enough to link some telemarks, open hardwoods.  Intermediate+ in favorable snow conditions, advanced in most conditions) to the Upper Loop Trail then on to Lower Loop & the Rosenburg Center.  Loop trails (intermediate) had seen fair amount of recent ski & snowshoe traffic but few (none recently) attempt the BBT.  4+ miles, 1,500' total elevation loss.  1'-2' of snow, powder slightly heavy from 50F temp.


Jan 1, 2008 - GRAFTON LAKES STATE PARK cross country skiing.  10", some wet spots & quite a few rocks - needs better base.  Starting at Mill Pond (on Long Pond Rd) we took the Spruce Bog Trail (completing the 3 day "bog" theme) - after a climb the trail levels out for the next 2 miles.  Snowmobile trails to Long Pond.  Trail around N side of pond has lots of rocks so crossed pond to S side.  4.7 miles, 2.7 hrs.