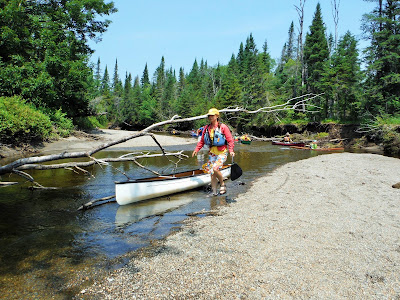 Feb 29, 2016 - MacINTYRE EAST. Rain showers in the morning. Started on Opalescent Road (dirt), soon arriving at gated bridge over the Hudson River. After skiing the icy road for a third of a mile the Opalescent River comes into view on the L. We left the road & followed a good trail that stayed close to the scenic river - flat & easy skiing. Came to the railroad bridge over the river, nice views from here; the trail continued on the other side of the rr but now hillier - intermediate skiing. The trail pulled away from the river & rejoined Opalescent Rd near a camp. Now on conservation-easement land, public access on the road past the camps is unknown... 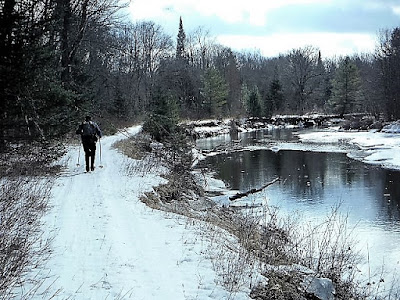 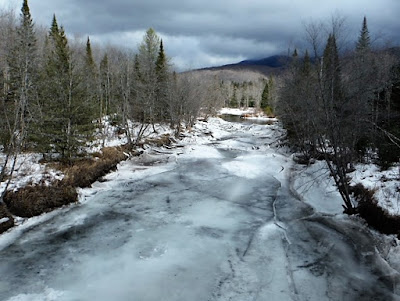 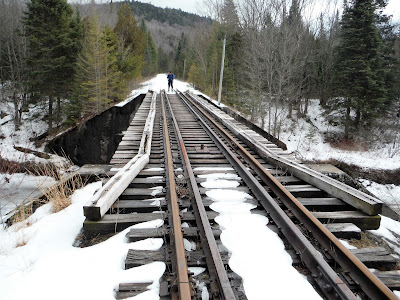 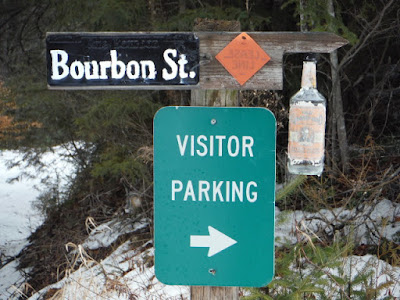 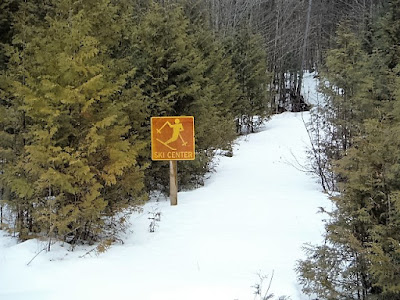 Oct 5, 2015 - HUDSON & GOODNOW RIVERS from the Polaris Bridge near Newcomb. Essex Chain Lakes Complex. Below freezing early this morning but warmed to low 60s. Third of a mile carry on dirt road gently downhill to the bridge. There is a campsite on the L a bit before the bridge. Just before the bridge a path leads 100' upstream to a put-in next to a boulder on river R. Blackwell Stillwater is about 3 miles long. Short distance to Goodnow River, got up it for 0.6 miles before rocky shallows after passing a huge boulder, couple of breached beaver dams on the way. 1 mile upstream from the bridge on the Hudson reached long stretch of rapids, stopped for lunch. Back downstream, swift water under the bridge (upstream travel difficult). Cabins of the Polaris club on E shore. 2 miles from bridge to top of rapids, rock-hopped to center of river for better view, a bald eagle flew past. Varied shores, some marsh, beaver ponds & steep forested areas. 8.4 miles. 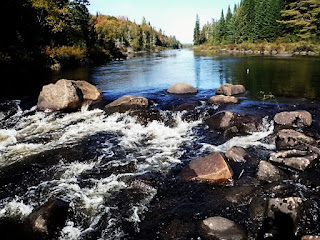 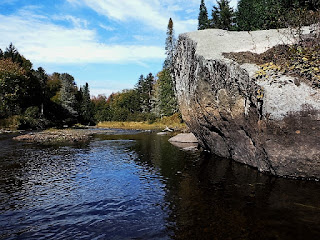 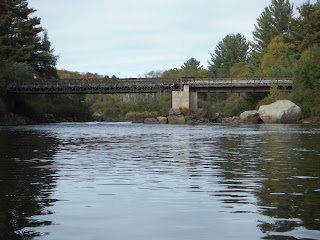 Oct 4, 2015 - HUDSON & OPALESCENT RIVERS from CR76 bridge. Hudson River gauge in Newcomb at 2.4'. 1.5 miles to S end of Sanford Lake where there were good views of Wallface & the Santanonis, half mile more to mouth of the OR. Got 3 miles up the OR, hard work against the current, had to get out a few times to line the canoe thru shallows. Under railroad bridge at 1.7 miles from HR. Lots of sand/gravel banks offer many places to rest. From HR (between OR & SL) looking N there was a good view of Algonquin, Colden & Marcy. Fall foliage close to peak. 10.2 miles. More details on 7-12-15 trip. 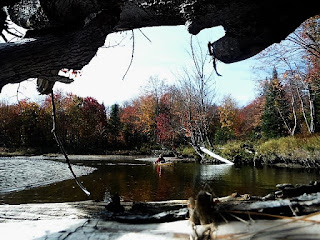 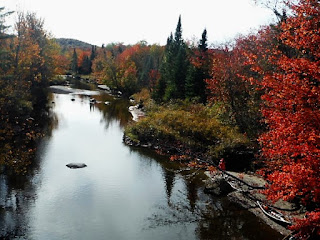 Jul 12, 2015 - OPALESCENT & HUDSON RIVERS. MacIntyre East. Hudson River gauge at Newcomb was at 2.35' this morning - I would not want to do this trip when levels are much lower. Started at the bridge over the Hudson at Opalescent Rd, a dirt logging road & gated (at the bridge) access to hunting camps. Upstream 1 mile on the shallow (1-1.5' deep) Hudson against a noticeable current soon passing the mouth of the OR to Sanford Lake, a widening of the river. Before reaching the lake there is a great mountain view incl. firetower on Adams + Algonquin, Colden & Marcy. From the S end of the lake Wallface seen to the N & Santanoni to the W. Back down the HR & up the OR. Got 3.7 miles up the Opalescent passing under rr bridge at less than half way. Had to line boats several times thru shallows (but only once going back downstream). Current was light to moderate. Lots of bends with sand/pebble banks for break &/or swim. Views of the North River Mountain range which rises over 2,000' above the river to the SE. Got out & viewed the river from the RR bridge. Back to the start, shuttled cars 1 mile S on CR25 then paddled downstream on the Hudson. Expected to go 2 miles on the river; realized we had missed the best take-out spot after going 2.5 miles so turned around & paddled upstream. "Best" take-out was a steep 100 yard bushwhack!. A great semi-epic outing. 13.4 miles, 7.5 hours. Swift Keewaydin 15 solo canoe. 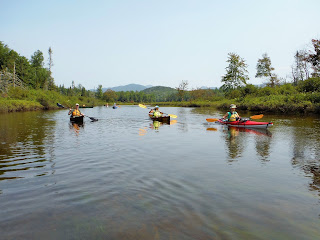 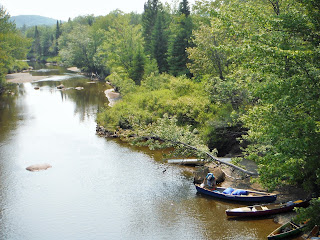 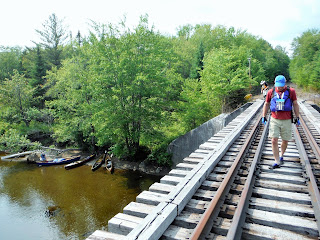 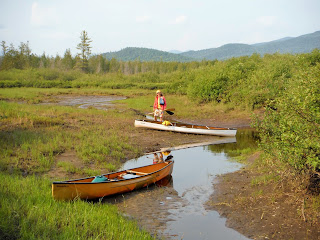 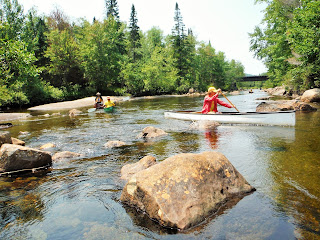 
Sep 20 - HARRIS LAKES & HUDSON RIVER in Newcomb.  It's leaf-peeping time....early fall color.  This website makes it sound like an easy trip between Harris & Rich Lakes - we found at least 4 rapids between the 2 lakes from class 1 to class 3 (if enough water)!  Geese, ducks, kingfishers, herons, yellowlegs, loon.  Couple of small motorboats not too obtrusive; can't say same for the couple of jetskis on Harris - Hudson River was best part of trip.  Nice High Peaks views from Hudson River a mile S of Rt.28N bridge.  Some development on S shore of Harris.  11 miles, 5 hours. 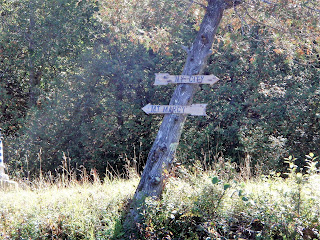 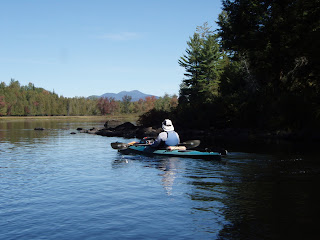 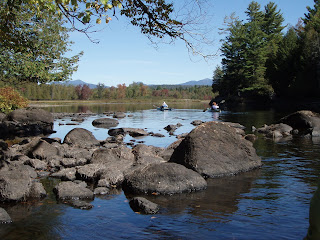