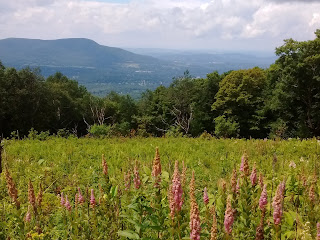 Lake Hancock, Congdon Shelter & Harmon Hill from FR 273 in Woodford VT.  Green Mountain National Forest.  FR 273 is driveable for 2.9 miles (parked) then becomes much rougher as an ATV/snomo trail.  There was some heavy machinery clearing an area nearby.  I saw a moose here while skiing a couple of winters ago.  After walking 0.8 miles, a good bridge goes R over Stamford Stream & that snomo trail crosses the Appalachian Trail/Long Trail in 300 yards (CS is then only 0.7 miles away or 1.9 miles from the start).  Continuing on FR 273, I crossed the AT/LT at 2.3 miles then reached Lake Hancock 0.1 miles further - nice pond, saw 5 mergansers & 2 people on an ATV,  also an old run-down cottage.  Took the AT/LT N for 2 miles to the shelter passing a view of a meadow, a beaver pond & Stamford Stream.  CS (2,088') is one of the older shelters around being built in 1967, roof leaked a little bit - it has 4 bunks for 2 people each & there is a picnic table squeezed inside, a good moldering privy nearby but no bear box, an intermittent stream next to the shelter provided water.  A Long Trail work crew was camped nearby, the trail can be very wet & muddy.  Continued N on the AT/LT for 0.8 miles reaching a junction with Old Stage/Dunville Hollow Trail, an ATV/snomo trail with large puddles - a R on this trail leads to FR 273 in ~1 miles, the crossing of Stamford Stream could be difficult to impossible in high water after rains (an unmarked short-cut trail goes along the N side of Stamford Stream to CS), then one passes the man-made clearing which is on the R - there are some views to be had, lots of slash on the ground.  The AT/LT goes up over 2,500' before dropping to Harmon Hill (2,325') 1.7 miles from the Old Stage junction.  Picked raspberries & enjoyed a view of Mt Anthony over Bennington - could also see some of the Taconics & hills of New York + the Bennington Monument - some road noise from roadwork in town.  Vegetation in the clearing is about waist high but there are a few paths thru.  From HH it is a steep drop of almost 1,000' in 1.6 miles to Rt.9.  Closed gentian - a late bloomer.  The AT & LT run concurrently for 105.2 miles. 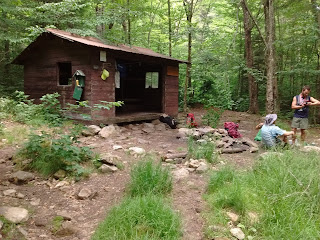 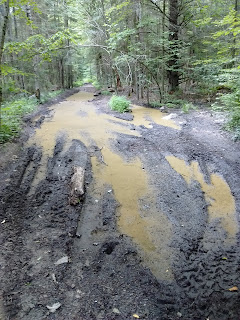 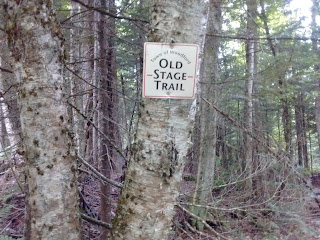 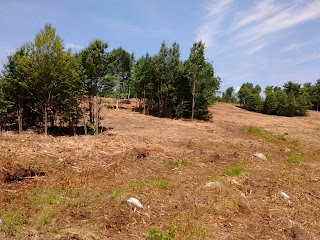 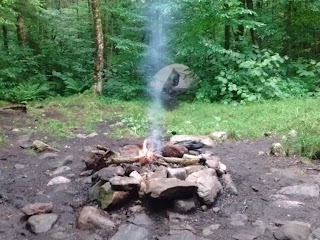 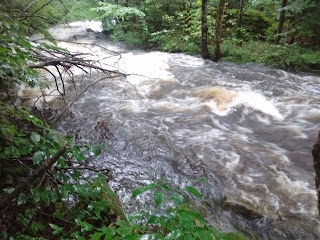 Dec 28, 2014 - FOREST ROAD 273 from Rt.9 in Woodford VT, elevation ~2,100'. The snowmobile (saw none) trail climbs moderately gaining a quick 150', crosses some trails of the Prospect Mtn Nordic Ski Center then slowly drops over 200' (novice). The road condition worsens (a good thing for skiers) after about 3 miles & snowmobile use drops off greatly. Lots of recent moose tracks & scat then I see the guilty party, scrambled for my camera but the moose headed off thru the woods, I followed its tracks for a while. Some wet spots but easily avoided. Stamford Stream seen to the R, a bridge over it leads shortly to the AT/LT. Continued for a bit on FR 273 with meadow to the R but trail had more wet spots here so turned around. ~8" avg hardpack, soft surface since temp had been above freezing for over 24 hours (rain overnight). Good skiing. Used my rock skis but good skis would have been ok. 8.1 miles, 3.5 hours. 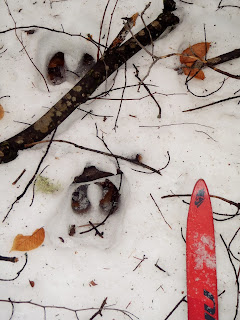 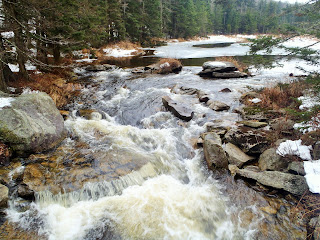 Jan 28, 2013 - DUNVILLE HOLLOW.  Parked on Notch Rd off Rt.9 just E of Bennington VT.  Variable conditions.  FR 75 from end of road (just to the R of a residence) - nice skiing climbing gently alongside scenic Stamford Stream.  Soon find out that this forest road is closed even to foot traffic - a section is washed out thanks to Irene - we took off skis & carefully got past by grabbing a hold of vegetation, if you slipped on the ice you could be down the creek!  Half way up the road we passed 3 "camps" & see a couple of moose ;-)  Light snowmobile use from here (none today, good skiing) up to a junction at 2.5 miles.  Turned R past a camp & climbed with Stamford Stream still down to our R.  Next R on Old Stage Trail (poor coverage on hills, stream crossings ok, rocks, needs more snow).  L on unmarked path (good) which led us to Congdon Shelter on the AT/LT.  After lunch headed N on the AT/LT (poor, hit too many rocks) & past the junction of Old Stage Trail, stopped at a steep uphill well before Harmon Hill.  Decided to go back down off-trail (very good to excellent) finally reaching the Old Stage (poor on the downhills) which we took back down with a couple of off-trail side-trips (excellent) for turns.  Did a short loop over to FR 273 before heading back down.  850' elevation change, 5.2 hours. 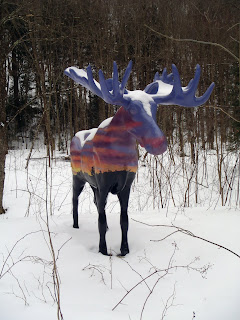 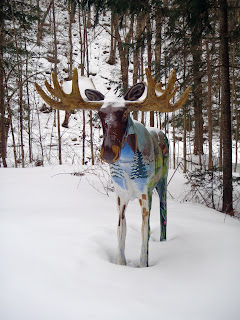 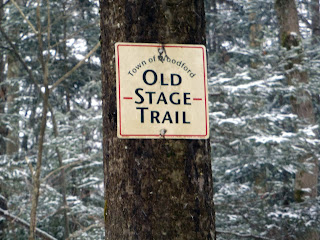 Mar 8, 2010 - APPALACHIAN & LONG TRAILS from Dunville Hollow.  Lots of snow, 2'+ above 2,000', hint of iciness at first but softened up as temp got well above freezing.  Park car on Notch Rd off Rt. 9 E of Bennington.  Lightly used snowmobile trail alonside Stamford Stream.  Moose at couple of camps.  Breaking trail from now on (only sink in 3-4").  Old Stage Trail across 2 streams (iced over) then unmarked trail L to Congdon Shelter.  N on AT/LT to 2,560' hill.  Would like to have reached Harmon Hill but ran out of time (lost trail for a while) - next time.  Whitewater skiing on Stamford Stream on way back.  9.5 miles, 5.5 hours, 1,100' elevation gain/loss. 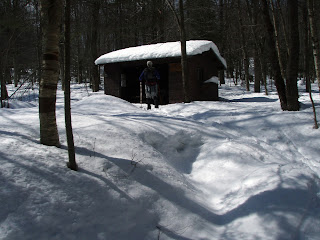 Mar 16, 2009 - DUNVILLE HOLLOW, Woodford, VT.  Excellent conditions as sun had softened the surface - area is mostly hardwoods.  Parked on City Stream Rd just off Rt.9.  Out on Forest Road 273, a snowmobile trail.  Crossed 3 trails of Prospect Mtn Ski Area then R "off-trail" heading W.  Soon found an old logging road going in our direction, then another one R or N up unnamed 2,315' hill.  Turned around, enjoying the downhill then R or W on original old road & down along stream that dumps into Stamford Stream in Dunville Hollow after 650' drop from our highest elevation - exhilarating!  Looped the long way back on snowmobile trails.  3 hours.
Mar 4 - CONGDON SHELTER from Notch Rd (S off the Rt.9 hill @ ~1,450'el), Woodford, VT, drive short distance to parking area on L.  Walk/ski to end of road & take a right on 4WD road to R of house.  3"-6" powder on crunchy base - very nice skiing.  Going up Dunville Hollow along Stamford Stream.  Eventually reach couple of fancy camps & some very interesting moose statues.  At ~2.3 miles, after gaining over 400', take R at a clearing & pass another camp, now climbing moderately (great for telemark turns on way back).  At 4-way junction take R on Old Stage Trail (occasionally marked, but obvious old road, aka Dunville Hollow Trail on the Stamford USGS map).  Gain of 800' from start as we take L on Appalachian & Long Trails (lots of moose tracks).  AT not as easy to follow & we lose it a couple of times down to Congdon Shelter.  After lunch we cross the stream next to the shelter & find an old trail which soon leads to our tracks on Old Stage.  Explore a clearing with blackberry bushes which has view of Houghton Mtn.  Back to 4-way, we take R then L on snowmobile trail then L back on Old Stage & out.  Nice variety.  8-9 miles, 4.4 hours.