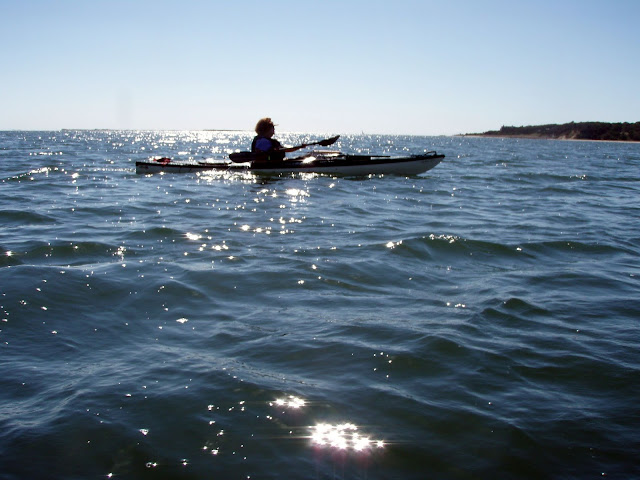 Sep 12, 2015 - NAUSET MARSH from Hemenway Landing in Eastham. Started over 2 hours before high tide for the ocean. Poked into Salt Pond where the National Seashore Visitor Center is. NE to shallow Nauset Bay then down easternmost creek SE to Nauset Inlet. Hung out almost 2 hours watching gray & harbor seals. Zig zag course on marsh creeks then around S side of marsh going past Fort Hill. Water is clear, even in the marsh. Hundreds of seals, group of scoters, plovers, great & snowy egrets. 10 miles, 5.5 hrs. A shark was spotted at Marconi Beach today. 16' shark spotted at Nauset Inlet - story. 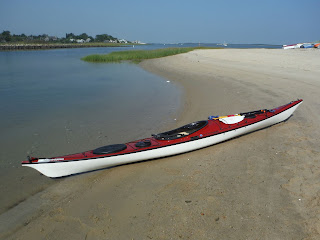 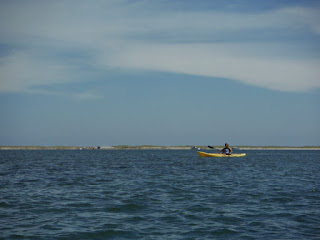 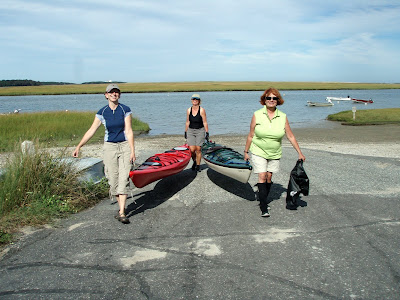 Sep 11, 2015 - WALKERS, UPPER & LOWER MILLPONDS from Slough Rd in Brewster. Wanted to paddle Chase Garden Creek but the bay was real choppy, so to plan B. Wind 10-20mph from the N. Freshwater kettle ponds, lightly developed, some conservation lands. Did each pond clockwise. Shallow passage from Walkers to Upper (the biggest of the ponds). Narrow (down to 3') 250 yard passage to Lower & grist mill/dam. Wind & bouncy waves on return. Green & gb herons, osprey, swans (1 cygnet). Drove over to Coast Guard Beach & walked S on Nauset Spit over 1 mile to Nauset Inlet, saw over a thousand seals. Sunset at Rock Harbor. 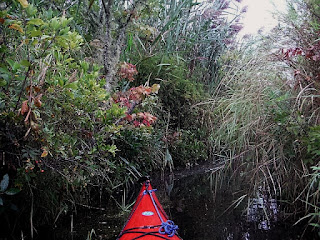 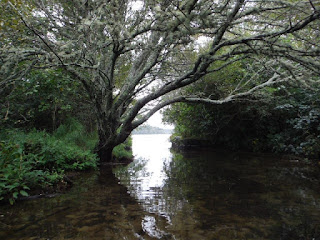 Sep 10, 2015 - LITTLE PLEASANT BAY from landing at end of Portanimicut Rd in Orleans. Forecast for rain in pm, light wind. Started at mid flood tide. Past Seal Rock & across to Hog & Sampson Islands. Around S side, eelgrass in water, then N on shallow Broad Creek (best done closer to high tide) with barrier dunes & Atlantic Ocean to the E, snowy egrets in shallows. Saw fog rolling in (I have a Brunton deck compass) so crossed over to Old Field Point then across to Namequoit Point following shore back to landing. Continued S to Sipson Island with short break at Eelman's Point, saw seal. Back to landing & into tiny Paw-Wah Pond, heard thunder. 6.6 miles, 2 hrs. Visited several beaches in the rain, not many people - used inexpensive highly waterproof/breathable umbrella. 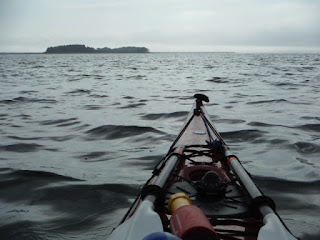 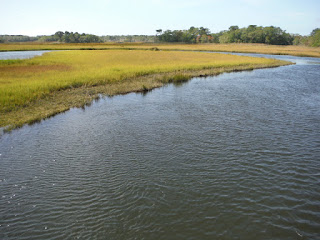 Sep 8, 2015 - BARNSTABLE HARBOR from Blish Point state boat launch. Hot, humid, light breeze. Sandy Neck is a 7-mile-long barrier beach on Cape Cod Bay with 2nd highest dunes on Cape Cod. Paddled 1.5 miles to the old lighthouse then to Beach Point at the tip. Back W, good look at The Dromedary dunes, around N side of marshy Great Thatch & Little Thatch islands then up Wells Creek - I could feel the ebb current & turned around then across harbor S of Phillis Island. 8.8 miles, 2.6 hrs (no breaks). 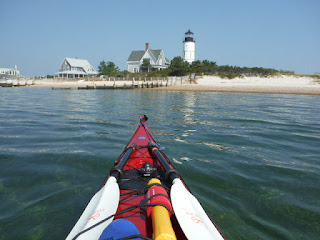 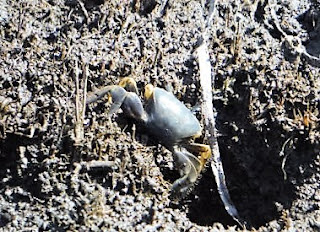 Sep 7, 2015 - WASHBURN ISLAND from Whites Landing in Falmouth. Down Childs River, L on Seapit River to Waquoit Bay. Had to go wide around 2 shallow spits as I paddled down the E shore of Washburn Island & past some campsites. Over to the narrow inlet for a break then over to Tom's Pond. Short walk across dunes past rugosa rose with hips to the Sound - stiff SW wind creating good waves here, Martha's Vineyard seen 5 miles out. Crossed Tom's Pond to 200' portage to Eel Pond then N to Childs River. Lots of osprey, gulls, cormorants. 8.4 miles, 4.7 hrs. Drove over to the Estuarine Preserve & hung out on an Adirondack chair on top of bluff with view of the bay - learned that in 2012 there were 37 nesting pairs of osprey in the bay area. 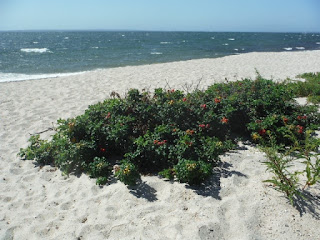 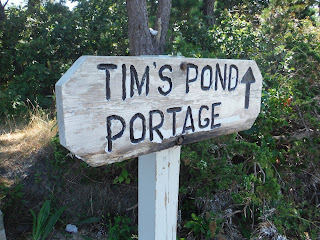 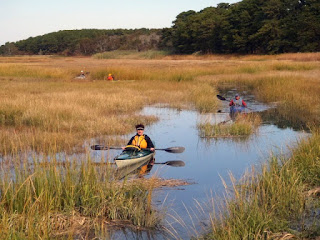 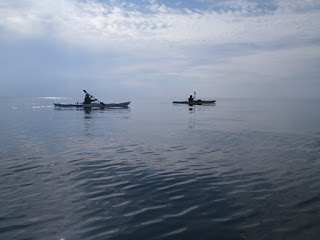 Aug 20, 2012 - BASS HOLE area from Grays Beach in Yarmouthport, Cape Cod.  Walk on boardwalk across marsh.  Fiddler & green crabs.  Light S wind.  Launched 4 hours before high tide & there was a good current to paddle against to get out onto Cape Cod Bay.  The bay was quite calm with clear water & shallow areas.  Paddled SW toward Barnstable & then NE past Chapin Beach.  Dunes closed off to allow for nesting terns & plovers.  Back thru the inlet & up Chase Garden Creek.  Look carefully for the miniature flowers of sea lavender.  Bass Hole area probably best 2 hours either side of high tide to avoid max currents. 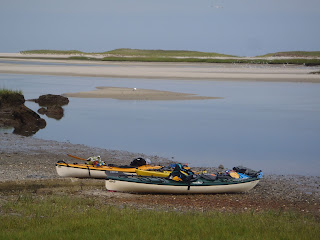 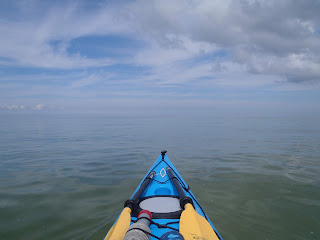 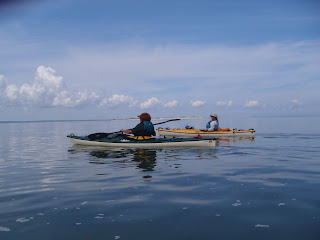 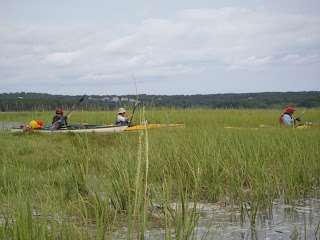 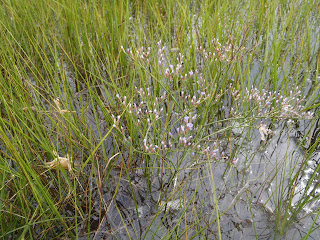 Aug 19, 2012 - POPPONESSET BAY near Mashpee on CAPE COD.  From town landing on Ockway Bay off Great Neck Rd.  Across the bay & into Fullers Marsh - great egret, little green herons.  Out thru the inlet & onto Nantucket Sound.  N wind 5-10 knots, waves up to 1'.  Popponesset Beach - lunch & swim on almost a mile of undeveloped beach.  Across the bay & up the Mashpee River - some development at 1st but soon into conservation land.  Large quantities of osprey.  Some motorboats - there is a narrow deep water channel across the bay.  Dagger Alchemy, a most versatile & fun 14' touring kayak.